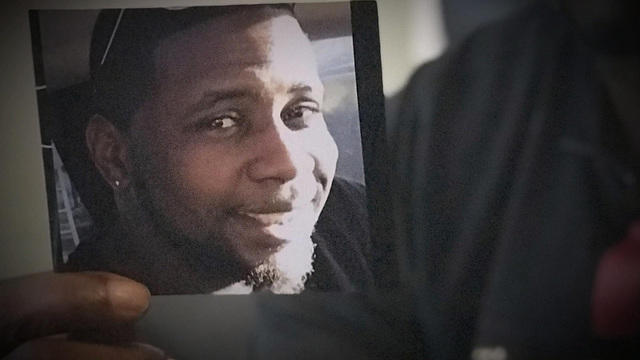 CLEARWATER, Fla. -- The autopsy of a black man who was shot to death by a white man in a parking lot dispute that set off a debate about Florida's "stand your ground" law has been released. The report shows the bullet entered Markeis McGlockton's body at an angle and tore through his heart and both lungs.

The Tampa Bay Times asked another medical examiner to review the autopsy released Tuesday. Dr. Stephen Nelson said it was consistent with a widely circulated surveillance video of the shooting, which shows McGlockton starting to turn away after the shooter, Michael Drejka, drew his gun.

The incident started with an argument between Drejka and McGlockton's girlfriend over why she had parked in a handicap-reserved space without a permit. Drejka was charged with manslaughter and is out on $100,000 bail awaiting trial.

Drejka claims the shooting was self-defense. According to a transcript of his interview with Pinellas County Sheriff's detectives, he said that if McGlockton had retreated, or even stayed still, he wouldn't have used his gun.

But McGlockton's girlfriend, Britany Jacobs, said McGlockton moved back. The 70-page interview of Drejka sheds light on his thinking in the seconds before the shooting.

Surveillance video from July 19 shows Drejka starting a confrontation over a parking space. Jacobs was seated in the couple's car with two of their children, ages 3 years and 4 months.

Jacobs, whose interview with officers was in the newly released documents, said after parking, the 28-year-old McGlockton had gone into the store. That's when another vehicle pulled up and a man later identified as Drejka got out and started looking at her car in the disabled spot, then started hassling her, saying, "'Well, you need to move your car,' and all this and this, you know, 'Cause, you know, I got family that's handicapped,' and all this and this. So, I'm saying, 'Dude, uh, no. I don't know you, so, you know, leave me alone.'"

The two exchanged more heated words. McGlockton then came out of the store and knocked Drejka to the pavement.

"Markeis came running out and he pushed him," Jacobs said. "He was like, you know -- you know, um, 'Stay away from my girl,' or something, he said. And then all of a sudden, dude was on the ground, and he pulled out a gun and shot him."

Said Jacobs: "All he did was backed up. 'Cause, you know, anybody, you know, with a gun pointed at him, he gonna, you know, shut up and not say nothing."

Drejka, who is 48, told a detective, "It happened so fast and that was that ... I was literally blindsided."

During the interview, the retired tree trimmer said he'd carried a gun since he was 22, and that people parking illegally in handicapped spots at that store was a pet peeve, and that he'd approached people before. "Does it ever go through your mind ... that they might not take that right? That this might go sideways a little bit?" the detective asked.

"Um, well, sure. But that's why I take precautions, as well," Drejka said.

When asked what kind of precautions, Drejka replied: "Well, I'm a very careful person and I have a permit." In an interview with CBS affiliate WTSP-TV after his arrest, Drejka said that parking spaces for the disabled "have always touched a nerve" because his high school girlfriend and his mother-in-law used disabled parking spots.

McGlockton's family has been outspoken in their dismay over how the case was handled, and hired attorney Benjamin Crump, who gained national prominence representing the family of Trayvon Martin after the black teen's fatal shooting by a Hispanic man in 2012.