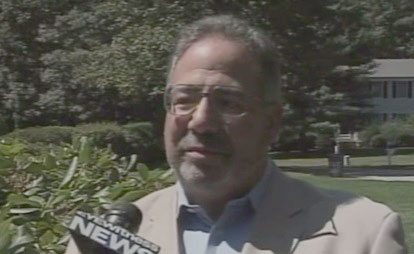 Weiner, 62, died in Newport as he prepared to head to the convention in Philadelphia, former Providence Mayor Joe Paolino said. He had wanted to see his longtime friend, former President Bill Clinton, address the convention Tuesday, Paolino told The Providence Journal.

Bill Clinton said during his speech late Tuesday that he and Hillary Clinton cried together upon learning that Weiner had died.

His cause of death wasn't immediately known, but Weiner had been treated for years for leukemia.

Clinton "couldn't have been nicer to Richard, as he always is," Paolino said, CBS affiliate WPRI reported. The former president suggested the convention find a way to pay tribute to Weiner at some point in the coming days, he said.

Weiner's company, Financial Innovations Inc., has since 1980 provided the official campaign merchandise for the DNC, such as T-shirts and buttons. The company also provided merchandise and other work for political candidates including Barack Obama's presidential campaigns in 2008 and 2012 and for current presidential candidate Hillary Clinton. He is a longtime friend of the Clintons.

Paolino told The Providence Journal that Weiner first met Hillary Clinton in 1976, when she was running Jimmy Carter's presidential campaign in Indiana and Weiner was her intern. Weiner had been involved in every presidential campaign since then. He also held several leadership roles over the years in Democratic Party organizations.