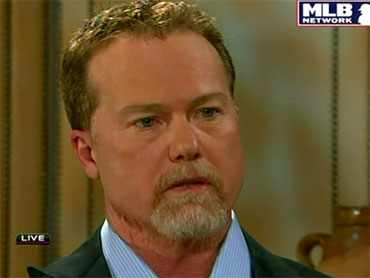 McGwire said in a statement sent to The Associated Press on Monday that he used steroids on and off for nearly a decade. During a 20-minute telephone interview shortly afterward, his voice repeatedly cracked.

"It's very emotional, it's telling family members, friends and coaches, you know, it's former teammates to try to get ahold of, you know, that I'm coming clean and being honest," he said. "It's the first time they've ever heard me, you know, talk about this. I hid it from everybody."

McGwire said he also used human growth hormone, and he didn't know if his use of performance-enhancing drugs contributed to some of the injuries that led to his retirement, at age 38, in 2001.

"That's a good question," he said.

He repeatedly expressed regret for his decision to use steroids, which he said was "foolish" and caused by his desire to overcome injuries, get back on the field and prove he was worth his multimillion salary.

"You don't know that you'll ever have to talk about the skeleton in your closet on a national level," he said. "I did this for health purposes. There's no way I did this for any type of strength use."

But Tom Verducci, with the MLB Network and a writer for Sports Illustrated said "this is not someone who dabbled in steroids - tried them once. This is someone who admitted most of his career was built on steroids."

McGwire hit a then-record 70 homers in 1998 during a compelling race with Sammy Sosa, who finished with 66. More than anything else, the home-run spree revitalized baseball following the crippling strike that wiped out the 1994 World Series.

Now that McGwire has come clean, increased glare might fall on Sosa, who has denied using performing-enhancing drugs.

"I wish I had never played during the steroid era," McGwire said.

McGwire's decision to admit using steroids was prompted by his decision to become hitting coach of the St. Louis Cardinals, his final big league team. Tony La Russa, McGwire's manager in Oakland and St. Louis, has been among McGwire's biggest supporters. CBS News correspondent Armen Keteyian reports La Russa says he'd consider using McGwire as a pinch hitter - giving him more time to convince voters to get into the Hall of Fame.

Before a carefully rolled out schedule of statements and interviews, he called commissioner Bud Selig, La Russa and Maris' widow, Pat, on Monday to personally break the news and left messages for the current stars of the Cardinals. He issued a statement and called the AP to get his admission out, then gave several interviews.

McGwire even understands why the Maris family now believes that Maris' 61 homers in 1961 should be considered authentic record.

"They have every right to," McGwire said in an interview on the MLB Network.

In his AP interview, McGwire's voice shook when he recounted breaking the news to his son, Matt, who is 22. When McGwire hit the record homer, he hoisted Matt - then a 10-year-old batboy - at home plate. The former player called that conversation the toughest task in the ordeal.

"He's very, very understandable. So are my parents," McGwire said. "The biggest thing that they said is they're very proud of me, that I'm doing this. They all believe it's for the better. And then I just hope we can move on from this and start my new career as a coach."

"I never knew when, but I always knew this day would come," McGwire said. "It's time for me to talk about the past and to confirm what people have suspected."

Others have been tainted but have denied knowingly using illegal drugs, including Barry Bonds, Roger Clemens and David Ortiz.

Big Mac's reputation has been in tatters since March 17, 2005, when he refused to answer questions at a Congressional hearing. Instead, he repeatedly said "I'm not here to talk about the past" when asked whether he took illegal steroids when he hit a then-record 70 home runs in 1998 or at any other time.

"After all this time, I want to come clean," he said. "I was not in a position to do that five years ago in my congressional testimony, but now I feel an obligation to discuss this and to answer questions about it. I'll do that, and then I just want to help my team."

McGwire said he wanted to tell the truth then but evaded questions at that hearing on the advice of his lawyers.

"That was the worst 48 hours of my life," McGwire said.

"His willingness to admit mistakes, express his regret, and explain the circumstances that led him to use steroids add to my respect for him," the manager said.

McGwire disappeared from the public eye following his retirement as a player following the 2001 season. When the Cardinals hired the 47-year-old as coach on Oct. 26, they said he would address questions before spring training, and Monday's statement broke his silence.

"I remember trying steroids very briefly in the 1989/1990 offseason and then after I was injured in 1993, I used steroids again," McGwire said in his statement. "I used them on occasion throughout the '90s, including during the 1998 season."

McGwire said he took steroids to get back on the field, sounding much like the Yankees' Andy Pettitte two years ago when he admitted using HGH.

"During the mid-'90s, I went on the DL seven times and missed 228 games over five years," McGwire said. "I experienced a lot of injuries, including a ribcage strain, a torn left heel muscle, a stress fracture of the left heel, and a torn right heel muscle. It was definitely a miserable bunch of years, and I told myself that steroids could help me recover faster. I thought they would help me heal and prevent injuries, too."

Since the congressional hearing, baseball owners and players toughened their drug program twice, increasing the penalty for a first steroids offense from 10 days to 50 games in November 2005 and strengthening the power of the independent administrator in April 2008, following the publication of the Mitchell Report.

"Baseball is really different now - it's been cleaned up," McGwire said. "The commissioner and the players' association implemented testing and they cracked down, and I'm glad they did."

"I am pleased that Mark McGwire has confronted his use of performance-enhancing substances as a player. Being truthful is always the correct course of action, which is why I had commissioned Senator George Mitchell to conduct his investigation. This statement of contrition, I believe, will make Mark's reentry into the game much smoother and easier.

"While we, along with all sports organizations, continue to battle the use of such drugs and continue the intensive search for a valid test for HGH, I believe our drug testing program is the toughest and most effective in professional sports. Last year in the Major Leagues, we had only two positives for steroids out of 3,722 tests. We have banned and aggressively test for amphetamines, substances which club doctors and professional athletic trainers have told me had presented serious problems for the sport for decades. Our minor league program will begin its 10th year in 2010. We conducted 8,995 tests in the minor leagues last year of which less than eight-tenths of one percent was positive.

"The use of steroids and amphetamines amongst today's players has greatly subsided and is virtually non-existent as our testing results have shown. The so-called "steroid era" - a reference that is resented by the many players who played in that era and never touched the substances - is clearly a thing of the past, and Mark's admission today is another step in the right direction."