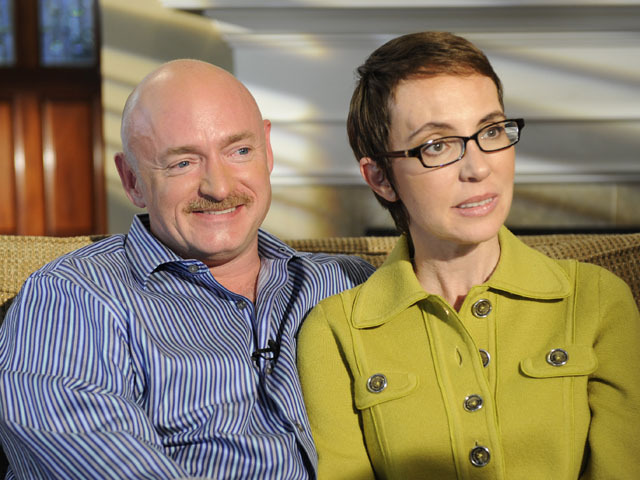 WASHINGTON - The husband of the U.S. congresswoman recovering from a mass shooting in Arizona says he has no interest in running for her House of Representatives seat if she's unable to do so.

Former astronaut Mark Kelly says Gabrielle Giffords is "still improving" and she'd like to run for another term. Kelly tells ABC's "Good Morning America" his job is to "make sure she can get better so she can go back to her career."

Kelly says Giffords is working on just stringing her sentences together and says viewers didn't see that so much in Monday night's taped ABC interview.

Kelly says his wife hasn't made the decision yet whether to seek another term, but that she'll know when the time is right.

In the interview broadcast Monday, Giffords said she would not return to Congress until she is "better."

"No. Better," she said in Monday night response to a question about whether she wanted to return to D.C. As she gestured as if to help her form the words, her husband Mark Kelly completed the thought: "She wants to get better."

At that point, interviewer Diane Sawyer asked whether she was thinking she would go back to Congress if she got better. "And that's where you're at right now?" Sawyer asked.

The Arizona shooting reopened a national debate over gun use and ownership. The right to bear arms is guaranteed by the U.S. Constitution, alongside such basic rights as freedom of speech and of religion. State laws on gun control vary widely. Proponents of gun control argue that the states with more guns have higher death rates. But some Americans are undeterred and blame incidents on such social ills as broken families or a culture of violence, or just bad luck.

The story of the recovering congresswoman and her astronaut husband has riveted people in the U.S., and their memoir, titled "Gabby: A Story of Courage and Hope," is set for release Nov. 15.

The television interview comes as fellow victims of the shooting came to Washington to testify in favor of a gun-control bill. They said Giffords' appearance represents a milestone for them, helping them cope with the trauma they've endured over the past 10 months. About a dozen survivors and family members were lobbying for legislation that would extend criminal background checks to all gun sales and enhance the quality of the FBI's criminal background checks.

Since the Democrat made a surprise appearance on the House floor this summer to cast a vote on the debt ceiling increase, there has been wide speculation about her career plans, including whether she would run for the state's open Senate seat.

The ABC interview showed a woman who appeared confident and determined, but still far from able to carry on a detailed conversation. She spoke in a clear voice, but in halting phrases: "Pretty good ... Difficult ... Strong, strong, strong," she replied to questions about how she was feeling and how she'd fared over the 10 months since the shooting.

The Giffords interview was accompanied by video Kelly shot documenting Giffords' recovery. The initial days and weeks showed her struggling to understand what had happened and to communicate in the most basic forms. She struggled just to learn how to nod, to raise two fingers. When her therapist asked what one sits in, she replied "Spoon," before later settling on "chair." Kelly said she used the word "cheeseburger" to describe several items.

Eventually, she learned to speak again and smile.

Kelly said he documented her recovery because he knew she would astonish her skeptics.

"Gabby Giffords is too tough to let this beat her," Kelly said.

Kelly said Tuesday morning his wife is still improving and that she's interested in returning to Congress, if possible.

He also said that he would not run if she's unable to do so, saying, "It's my job to make sure she can get better so she can go back to her career."

Giffords has undergone intensive therapy. At times, despair set in. One clip shows her sobbing in her therapist's arms.

"Can I tell you something? It is going to get better," her therapist said at one point. "You've come a long way in five weeks."

Giffords is shown becoming more upbeat and smiling more frequently in the ensuing months. She now walks with a limp and can talk, though she generally speaks in halting phrases, or repeats a word to get her point across.

At one point, Kelly used the work "brave" to describe the word on his mind when he thinks of her — "brave and tough," he said. Then Giffords, looking directly at Kelly, responds almost in a whisper: "Tough, tough, tough" and she kissed his bald head.

Sawyer asked Giffords if she was ever angry about what happened to her. Giffords replied, "No, no, no. Life, life."

Ken Dorushka, who was shot in the arm during the rampage as he shielded his wife, said the victims have become like close family members and would watch the broadcast together.

"Any time one of us has a success, it affects all of us and it helps our healing," Dorushka said.

The man arrested at the shooting, Jared Loughner has pleaded not guilty to 49 charges stemming from the Jan. 8 shooting. He's being forcibly medicated with psychotropic drugs at a Missouri prison in an effort to make him mentally competent to stand trial.

In Monday's broadcast, Giffords and Kelly both expressed their concern that Loughner did not get the help he needed.

"If he had received some treatment, this probably never would have happened," Kelly said.