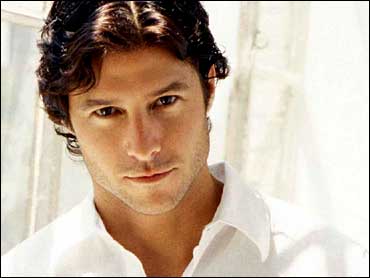 That was day four of The Early Show's "Soap Star Screen Test." The two eventual winners of the week-long star search will get roles on the CBS daytime drama "As The World Turns."

Each day, a star from the soap has been taking part in the live auditions.

Collier says he is enjoying his daytime drama work. "I like it a lot. I'm learning a lot. The writers have a great story for me," Collier said.

The ten participants in this week's screen test have all made brief appearances already on "As The World Turns" when the show went on the road last fall for the "Catch Us If You Can" college tour.

Jon, who played Mitch Pepper on the show, said it is a joke around his frat brothers. "But they, you know, they're my buddies and I'll take it. I'll take it," Jon said.

And when her live screen test was over, Megan said she was surprised she was not nervous and credited Collier for that.

What helped her out? "Just the fact that he doesn't think highly of himself at all. That just helped out. Not really any particular thing," she said about Collier.

Well if you liked Thursday's auditions, you can vote for Megan and Jon on Friday. Collier said they both did well: "I just felt it was very real. They seemed very natural. I think they both did a great job."

Visit our INTERACTIVE to find out all about the soap star hopefuls, the actual stars and read the scripts. Most importantly, watch their performances and compare them.

You get to vote Friday for your favorite performer. The online poll closes at midnight on Saturday. The male and female receiving the highest votes will debut in their new roles this summer on "As The World Turns."