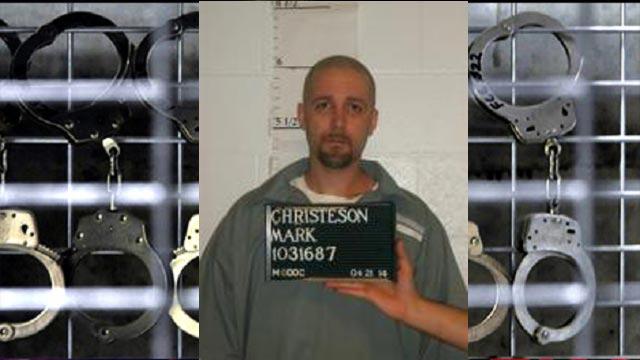 BONNE TERRE, Mo. -- Nearly 19 years to the day that Susan Brouk and her two children were taken to a Missouri pond and killed, one of the men responsible for the crime was put to death Tuesday.

Mark Christeson was given a lethal injection - Missouri’s first execution since May. Christeson, 37, was hours away from execution in 2014 when the U.S. Supreme Court granted a temporary stay. This time, though, the court allowed the execution to proceed, and Gov. Eric Greitens declined a clemency request for Christeson, the first inmate to be put to death since the Republican took office.

As the execution drug was administered, Christeson appeared to mouth “I love you” a couple times to people who were gathered to watch the lethal injection on his behalf. Soon, the inmate’s eyes closed.

He was pronounced dead at 7:05 p.m. CST, eight minutes after the lethal injection, a Department of Corrections spokesman said.

The killings of Brouk, her 12-year-old daughter, Adrian, and 9-year-old son, Kyle, traumatized the rural area around the south-central Missouri town of Vichy.

“It was a heinous crime. I’m just happy to see justice finally served,” said Maries County Sheriff Chris Heitman, who witnessed Christeson’s execution. “I have regrets for the family that it took so long, but I hope it provides closure to them.”

On Feb. 1, 1998, Christeson, then 18, and his 17-year-old cousin, Jesse Carter, decided to run away from a home outside Vichy where they lived with a relative.

They took shotguns and went to a rural home about half a mile away where Brouk and the children lived. The cousins planned to steal Brouk’s Ford Bronco, said Terry Daley Schwartze, who was Maries County’s prosecutor at the time of the killing and now.

When they arrived at the home, Christeson and Carter tied the children’s hands with shoelaces. Investigators said Christeson forced Brouk into a bedroom and raped her. When they went back into the living room, Adrian recognized Carter and said his name.

“We’ve got to get rid of ‘em,” Christeson told Carter, according to court records.

The family was forced into the Bronco. Christeson and Carter loaded the SUV with electronics and other items and drove to a pond.

Christeson kicked the 36-year-old mother in the ribs and cut her throat. She told her children she loved them as she lay bleeding.

Christeson then cut Kyle’s throat and held the boy under water until he drowned. Carter held Adrian while Christeson pressed on her throat until she suffocated, and then Carter pushed the girl’s body into the pond.

As Brouk struggled to stay alive, the cousins tossed her into the pond, where she drowned.

Brouk’s sister alerted authorities a few days later that the family was missing. A Missouri State Highway Patrol helicopter spotted one of the bodies in the pond, leading to a search that found the bodies of all three victims.

Meanwhile, Christeson and Carter drove to California, selling Brouk’s household items along the way. A detective in California’s Riverside County recognized the cousins from photos police had circulated. They were arrested eight days after the killings.

Carter agreed to testify against his cousin. He was sentenced to life in prison without parole.

The U.S. Supreme Court intervened in 2014 amid concerns about the ineptitude of Christeson’s earlier lawyers, who missed a 2005 deadline to file a federal appeal of his death sentence - standard procedure in death penalty cases. Attorneys for Christeson again argued that he deserved a federal court review, and raised concerns about his mental competence, claiming he had an IQ of 74. But this time, the courts declined to step in.

Missouri executed 16 men from 2014 to 2015, second only to the 23 executions in Texas over the same two years. Last year, Missouri had just one execution, largely because most of the 25 men on the state’s death row have appeals remaining or are unlikely to be executed due to medical or mental health concerns.