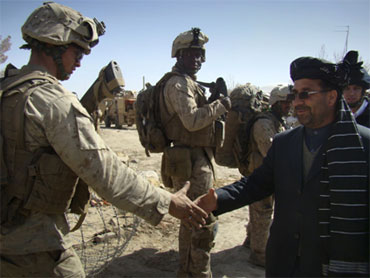 The Taliban's white flag no longer flies over villages across this militant stronghold. Afghan and NATO troops have replaced it with Afghanistan's official green-and-red banner, which they promise heralds new schools and clinics and good governance.

But residents have heard that before, and for many, Taliban rule hasn't been all that bad. Plenty of Afghans have made a living off the opium trade, which also funds the insurgency. While some residents greet NATO forces with tea, others just want the troops to clear their streets of explosives and leave.

No one here needs liberating, they say.

"The Taliban didn't create any problems for people. Every Thursday there was a court session, and if someone had a problem, he would go in front of the Taliban mullah who was the judge," said Samad Khan, a 55-year-old poppy farmer in the village of Saipo on the outskirts of Marjah. The Islamist militant group levied a 10 percent yearly tax on his poppy crop, and let him be.

Now, Khan says, he's worried that the assault, which began Saturday, is putting his family in danger.

"I'm afraid for my children, for my village, because the fighting is increasing," he said. He's looking for a way to flee to the nearby provincial capital of Lashkar Gah but said he's scared to pick his way through the explosive-laced fields to get there. The Taliban planted countless bombs in the area in preparation for the U.S.-led attack.

NATO officials say they are confident that once the 15,000-strong military force secures the area, they can win the population over by providing both dependable security and government services. Plans have already been drawn up to build schools, repair roads and install well regarded government officials.

But that means NATO and the Afghan government have to make good on pledges to stay and make sure the government works. Promises have gone unfulfilled before.

In March 2009, about 700 British troops invaded Marjah in an operation that they hailed then as a dramatic success. They declared the town back in government hands after a three-day assault.

Marines Reach out to Marjah Population
Marines Drive Into Afghan Stronghold
Marines Engage Taliban on Edge of Marjah
Afghanistan: Life on the Frontline

After NATO and Afghan troops took control of Qari Sahib village outside Marjah on Sunday, they tried to hold a meeting with local elders about the government services they'd be bringing. But most of the elders ignored the speeches, laughing and talking to one another throughout, according to an Associated Press reporter at the meeting.

The villagers seemed indifferent to the changing of the guard, though it had been dubbed a liberation. A white Taliban flag was still waving in Qari Sahib village a day after it was reclaimed by the government. Afghan military officials finally changed it to an Afghan flag on Monday.

Inside the town of Marjah, the poppy business boomed under the Taliban. Nearly every house in the north of the city has a plot of poppy growing in the yard.

Sharecropper Mohammad Khan said the Taliban didn't use draconian methods such as public executions and limb amputations to impose their reign in Marjah as they did in Kabul and other parts of the country when they ruled most of Afghanistan in the late 1990s.

"Honestly, they didn't bother us. They mostly just came and went," the rough-faced 55-year-old with a long beard said as Marines searched his neighborhood of northern Marjah.

"They weren't very organized," said Khan, who wore a white turban. Khan said most town matters were handled by a council of local elders, who worked to smooth relations between villagers and insurgents.

He said the Taliban's rule over the town was "mostly peaceful."

A father of six, Khan's house is on a compound surrounded by poppy fields. The Taliban encouraged everyone to grow the crop, he said.

"But I don't mind switching to wheat or rice if the government gives us seed," Khan said, adding that because he was a sharecropper, he did not see the substantial profits of opium sales. He worked the land for his neighborhood chief.

But there are certainly those who are eager to see the Taliban go.

Associated Press reporters talked to residents who were furious that the Taliban had taken over warehouses in the market to store bomb-making materials, that the militants had turned their town into a gigantic booby trap, that they blocked off roads and that they had tried to get people to stop listening to the radio or watching television.

Many local people were clearly just trying to live their lives the best way they could - making do with either with the Taliban or the forces trying to replace them.

Mohammad Salam, a former provincial council member in Helmand and a Marjah resident, said villagers told him that they are under threat from both sides.

"The poor people from Marjah are caught between two big pressures: the Taliban and the Afghan government and international forces. This is not good for people," Salam said.

The sticking point is whether the government-to-be will offer a real alternative.

Provincial officials acknowledge that government corruption is a major reason the Taliban have been able to gain people's support.

"Unfortunately, on the government side, there's too much corruption. In any case you bring to court, they want bribes from the bottom to the top level," said Mohammad Anwar, a member of the Helmand provincial council.

As for the Taliban, "they implement the law without corruption," he said.

When the central government first re-established control after the 2001 ouster of the Taliban, locals say it didn't do much.

"They just brought fighting to Afghanistan and brought all these militias, and appointed corrupt people as district chiefs," said Mohammad Anwar, a poppy and cotton farmer in Saipo village. He scoffed at the idea that the international troops would bring improvements in this latest offensive.

"You can't bring development to a village by force," the 60-year-old man said.