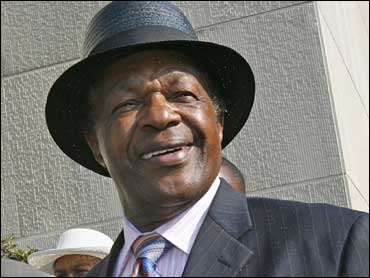 WASHINGTON (CBS/AP) Marion Barry used to be addicted to crack cocaine. Now, according to police charges, his latest addiction might be a female friend who accused him of stalking her.

Barry was arrested Saturday and charged with stalking a female acquaintance. It's the latest in a long string of troubles for the politician, who was once videotaped smoking crack cocaine.

U.S. Park Police said Barry, a current D.C. Council member, was arrested after a woman flagged down an officer and claimed that Barry was stalking her. He was charged with misdemeanor stalking and released.

A spokeswoman for Barry says the stalking charges against him are "baseless."

Barry served four terms as D.C. mayor. In 1990, during his third term, he was videotaped in a hotel room smoking crack cocaine in an FBI sting. He served six months in prison. In 1994, he regained the mayor's office.

Barry is currently on probation in a federal tax evasion case.
As for the new charges, spokeswoman Natalie Williams identified Barry's accuser Sunday afternoon as 40-year-old Donna Watts and told reporters that Barry had helped Watts financially during "various stages of instability" in her life.

The woman and Barry are friends and had lunch earlier in the day, Williams said. Barry ran into the woman again during Fourth of July festivities in Anacostia Park but was on his way home, alone, when the incident occurred, Williams said.