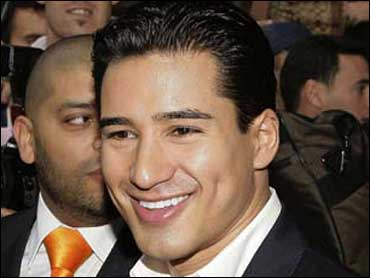 Actor/celebrity-host Mario Lopez has come a long way from his roles on "Kids Incorporated" and "Saved by the Bell."

But in the true spirit of A.C. Slater, Lopez still has that boyish charm and eye-catching physique that makes the girls go crazy.

Well the staff at People took notice too, naming him People's "Hottest Bachelor."

Lopez has one of the most recognizable faces in the world of reality TV - from being a contestant on "Dancing with the Stars," (Season 3) to the host of "Weekend Extra" and MTV's "America's Best Dance Crew" and now on Broadway in "A Chorus Line."

Photos: "Dancing with the Stars"

The 34-year-old Mexican-American heartthrob, has also been the host for Miss Teen USA, Miss America and Miss Universe pageants, making him even more popular among the ladies.

"I love reality TV," Lopez said. "It's live and it's a competition and I get to travel to exotic places."

He also has a book out, sharing his fitness tips in "Mario Lopez's Knockout Fitness," which was released in May.

Lopez has also heated up the stage with his bulging biceps on Broadway with his portrayal of Zach, "a charismatic, controlling, manipulative calculated, but brilliant Broadway director/choreographer" in the Pulitzer Prize and Tony award-winning "A Chorus Line."

"I am having a great time working on Broadway," Lopez said. "It's been an honor to be part of an iconic play like 'A Chorus Line,' it's been great. He (his character Zach) gets to be kind of a hard-ass. Michael Douglas played him in the movie. I am glad I get to sing and dance."

His recent success has been accompanied by a dose of media drama, whether or imagined.

It centers around Lopez and Nick Adams, who plays Larry, Zach's (Lopez') longtime assistant in the show.

The two hunks have been pitted against each other in a so-called "battle of the biceps," which has been written about in the New York Post's Page Six.

Media speculation began when Lopez first joined the cast of "A Chorus Line" and there was a costume change. The costume change essentially covered up Adams muscular physique and gave Lopez a short-sleeved shirt instead of a long sleeved sweater.

"I went from wearing the original costume design which is a blue tank top, to now, halfway through the show, I put on a hooded sweatshirt," Adams said. "I don't know where that came from. I understand that they want to feature Mario and people are coming to the show now to see him. I was never in opposition to that. I didn't have any questions as to why they were doing that. People caught wind of the story and assumed that it was his request, but I don't know who made that request."

According to Adams, the costume change made sense because it shows off Lopez' "beautiful body."

"I am doing 'A Chorus Line' on Broadway. It's not about my muscles. It's about the work and the piece itself," Adams explained. "And if they felt that they had to change it for some type of reason to put the focus on someone else, I get it."

Then a men's underwear company called "2 (exist)" supposedly wanted to offer Lopez a spread in their ad campaign, but caught a glimpse of Adams and then offered him the ad instead.

"I have no idea of any offer to Mario … they have never said a thing about that to me," Adams said. "They independently contacted me and I had a meeting with them and then they decided to go with me for the campaign. So, I don't know if they offered it to Mario or spoke to him or his people about it. I haven't really talked to Mario at all about it.

"To be honest, the sweatshirt was a blessing in disguise because it got all of this attention," Adams admitted. "Who knows if this opportunity would exist if we hadn't been in the news together?"

According to Adams, he and Lopez laugh about the press frenzy.

"Honestly, it's the best work environment that I've ever been in. He seems to be having a great time with the show. We have an incredible relationship," Adams said. "We work out together a couple times a week. He's been nothing but a joy to work with in the show. It's sort of like a brotherly friendship that we have. There is no feud or fighting."

"This was a moronic attempt for a men's underwear line to get publicity," said Lopez' publicist Lisa Perkins. "There is no truth to the story. They are castmates and they are friends. Someone is trying to make something out of nothing."

Regardless of the gossip conjured up by outside sources, no one can steal Lopez' thunder when it comes to being crowned People's "Hottest Bachelor."

"I think it's terrific," Adams said. "He works really hard for his body. He's a great guy, so I hope he finds the right fit. I know that he just broke up with Karina ( Smirnoff, his former "Dancing with the Stars" partner) and I know that's been sort of tough for him to deal with. I am proud of him. He works very hard."

Lopez, runner-up on Season 3 of "Dancing," and Smirnoff were recently recognized for their Tango, which was voted best performance of all time during the show's 100th episode. The two dated during and after the competition was conducted.

Although they tried to remain discrete, the pair was photographed on vacation together in Mexico at the culmination of the season. They moved in together a few months later, but have since split.

"I wish him the best of luck and that he's not a bachelor for long," Adams said. "I feel so honored to be compared to someone that is one of the hottest celebrities in Hollywood. It's been so flattering."
By Melissa Castellanos