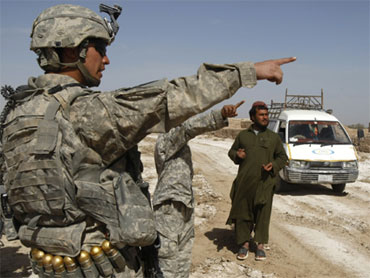 Coalition forces are still meeting stiff resistance in Marjah a week since the launch of a latest offensive in Afghanistan. CBS News correspondent Mandy Clark reports that Marjah is still a battlefield.


This morning driving down a narrow road, the lead vehicles and Marine convoy I'm traveling with was hit by a roadside bomb.

None of the Marines traveling in the heavily-armed truck was hurt, but this was the fourth attack on this road, and each time the bombs get bigger and more dangerous.

So the Marines have been doing a lot of walking and running, but that has left them exposed to a new kind of danger: sniper attacks.

Taliban fighters are held up in well-disguised bunkers, from where they have a clear shot at advancing U.S. Marines.

And there are many more bunkers out there that, even when they are spotted, the Marines are on strict orders to go slow and avoid using heavy weapons or air strikes.

The troops are taking extra risks to avoid civilian casualties, but still many residents - those who can - are packing up what they can carry and getting their families out of harm's way.