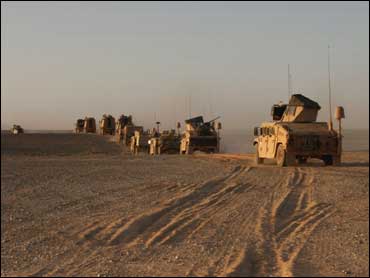 U.S. Marines in helicopters and Humvees flooded into a Taliban-held town in southern Afghanistan's most violent province early Tuesday in the first major American operation in the region in years.

Several hundred Marines, many of them veterans of the conflict in Iraq, pushed into the town of Garmser in predawn light in an operation to drive out militants, stretching NATO's presence into an area littered with poppy fields and classified as Taliban territory.

U.S. commanders say Taliban fighters have been expecting an assault and have been setting up improvised explosive devices in response. It wasn't known how much resistance the Marines would face in Garmser, where the British have a small base on the town's edge but whose main marketplace is closed because of the Taliban threat.

The assault in Helmand province - backed by U.S. artillery in the desert and fighter aircraft in the sky - is the first major task undertaken by the 2,300 Marines in the 24th Marine Expeditionary Unit, which arrived last month from Camp Lejuene, North Carolina for a seven-month deployment. Another 1,200 Marines arrived to train Afghan police.

Maj. Tom Clinton, the American commander at Forward Operating Base Dwyer, a British outpost 10 miles west of Garmser, said the Taliban had undoubtedly seen the Marines moving into the area in recent days.

But he said the fact that the Marines were assaulting the town by helicopter and were moving through by foot was likely a surprise.

"There's all kinds of reports of (Taliban) commanders telling their guys to grab their stuff and get out there" to fight, said Clinton, 36, of Swampscott, Massachusetts. "It's no secret they know we're here. It's just a question of when and where" an assault would happen.

The Marines' mission is the first carried out by U.S. forces this far south in Helmand province in years. An operation late last year to take back the Taliban-held town of Musa Qala on the north end of Helmand involved U.S., British and Afghan forces.

Helmand province is the world's largest opium poppy-growing region and has been a flashpoint of the increasingly violent insurgency the last two years. British troops - who are responsible for Helmand - have faced fierce battles on the north end of Helmand.

Most U.S. troops operate in the east, along the border with Pakistan, but Britain - with 7,500 troops - and Canada - with 2,500 troops in neighboring Kandahar province - have not had enough manpower to tame the south.

More than 8,000 people died in insurgency related violence last year. Militants set off more than 140 suicide bombs. Taliban fighters have been increasingly relying on roadside bombs and suicide attacks after being routed in force-on-force battles in the past.

"I think if it was me I'd be laying a ton of IEDs down and leaving some guys behind to shoot and run. I don't expect a lot of leaders to stay around," Clinton said of the number of fighters the Marines might face.

Marines had prepared on Monday by cleaning weapons and handing out grenades. The leader of one of three companies involved - Charlie Company commander Capt. John Moder - said his men were ready.

"The feeling in general is optimistic, excited," said Moder, 34, of North Kingstown, Rhode Island. "They've been training for this deployment the last nine months. We've got veteran leaders."

Many of the men in the 24th Marine Expeditionary Unit served in 2006 and 2007 in Ramadi, the capital of the Anbar province in western Iraq. The vast region was once al Qaeda in Iraq's stronghold before the militants were pushed out in early 2007.

Moder said that experience would inform how his men fight in Afghanistan. "These guys saw a lot of progress in Ramadi, so they understand it's not just kinetic (war fighting) but it's reconstruction and economic development."

But on the initial assault, Moder said his men were prepared to face mines and improvised explosive devices and "anybody that wants to fight us."

One Marine in Charlie Company, Corp. Matt Gregorio, a 26-year-old from Boston, alluded to the fact the Marines have been in Afghanistan for six weeks without carrying out any missions. He said the mood was "anxious, excited."

"We've been waiting a while to get this going," he said.