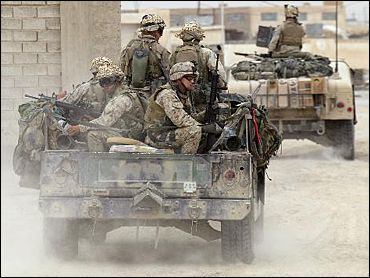 U.S. Marines announced Thursday an agreement to end a bloody, nearly month-long siege of Fallujah, saying American forces will pull back and allow an all-Iraqi force commanded by a former Saddam Hussein-regime general to take over security.

The Fallujah deal came after intense international pressure on the United States to find a peaceful solution to the standoff, following heavy U.S. bombardment of the city for the past two nights that was televised around the world.

U.S. Marines encircled Fallujah on April 5 and have fought an estimated 1,500 guerrillas in repeated battles as cease-fires unraveled, killing hundreds of Iraqis, including many civilians, according to hospital sources in the city of 200,000.

The deal provides for a new force, known as the Fallujah Protective Army, to enter the city Friday and provide security. It will consist of up to 1,100 Iraqi soldiers led by a former general from Saddam's military, Lt. Col. Brennan Byrne said.

Marine forces will pull back from their positions in and around Fallujah, while the FPA forms a new cordon around it and then moves into the city, Byrne said.

"The plan is that the whole of Fallujah will be under the control of the FPA," Byrne said.

He identified the commander of the FPA only as Gen. Salah, a former division commander under Saddam. Many of the guerrillas in Fallujah are believed to be former members of Saddam's regime or military.

Byrne did not know the general's full name. But a Lt. Gen. Salah Abboud al-Jabouri, a native of the Fallujah region, served as governor of Anbar province under Saddam and was a senior commander in Saddam's military.

The siege began after the killings and mutilations of four U.S. contract workers on March 31. In addition to the hundreds of Iraqis killed, at least eight Marines died in the fighting, although a full American casualty count from the battle has not been released.

On the southern edge of Fallujah, U.S. Marines from the 1st Battalion, 5th Regiment were packing up gear Thursday, saying they had been ordered to withdraw from the industrial zone they have held throughout the siege. Bulldozers flattened sand barrier that troops had set up.

Byrne said the Marines would remain around the Fallujah area, but not in an immediate cordon or inside the city, and the FPA will be subordinate to the Marine 1st Expeditionary Force.

Many of the guerrillas in Fallujah are believed to be former members of Saddam's regime or military. Last week, Iraq's top U.S. administrator, L. Paul Bremer, announced that the new Iraqi army would start recruiting top former Saddam-era officers who were not involved in the regime's crimes.

Three days of intense fighting around Fallujah had brought sharp international condemnation of the U.S. action.

"Violent military action by an occupying power against inhabitants of an occupied country will only make matters worse," U.N. Secretary-General Kofi Annan warned. "It's definitely time, time now for those who prefer restraint and dialogue to make their voices heard."

Mohsen Abdul-Hamid, a member of the U.S.-appointed Governing Council, also called on the United States to end the fighting in Fallujah and said if the United States refused, his Iraqi Islamic Party would consider withdrawing from the council.

"We call on the American troops that are bombing Fallujah to stop immediately and withdraw outside of the city," Abdul-Hamid told al-Jazeera television. "Otherwise, we'll be forced ... to consider the subject of withdrawal."