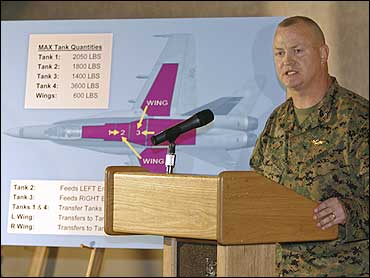 Marines knew five months before a military jet crashed into a home and killed four members of a family that the aircraft may have trouble getting fuel from tank to engine.

That ignored warning was only one misstep in what the Marines called a string of bad decisions that led the F/A-18D Hornet to slam into a densely populated residential neighborhood Dec. 8.

Low oil pressure killed the first engine shortly after takeoff, the Marines said Tuesday. The jet crashed with about 340 gallons of fuel that were choked off from the second engine, causing a fiery explosion that torched two homes and came close to a high school.

Potential problems with the plane's fuel transfer surfaced in July, but the Marines sent the aircraft on another 146 flights before it crashed, said Col. John Rupp, operations officer for the 3rd Marine Aircraft Wing at Marine Corps Air Station Miramar.

The dozens of successful flights after the warning "lured the maintenance personnel into a state of complacency," Rupp said.

Military investigators faulted officers at Marine Corps Air Station Miramar for clearing the pilot, Lt. Dan Neubauer, to land at the inland base instead of the closest landing at a coastal Navy base - a route that also would have avoided flying over homes.

They also criticized the pilot for neglecting to consult a checklist of emergency procedures and failing to grasp the severity of his problems.

The military disciplined 13 members of the Marines and Navy for a series of errors that led to the crash, including four officers who were relieved of their duties. Investigators found no evidence of criminal wrongdoing.

Neubauer, who ejected safely two miles from the runway, has not been disciplined but his actions will be reviewed at Marine Corps headquarters.

Recordings of conversations between federal air controllers and the pilot show the pilot was repeatedly offered a chance to land the plane at the Naval Air Station North Island in Coronado. The base sits at the tip of a peninsula with a flight path over water.

Instead, the Federal Aviation Administration tapes disclose that the pilot decided to fly the jet, which had lost one engine and was showing signs of trouble with the second, to Marine Corps Air Station Miramar, which is about 10 miles north of Coronado.

A squadron representative on the aircraft carrier told the pilot to land at North Island, which was a "conservative and prudent decision," Rupp said.

A low-fuel warning occurred 25 minutes into the flight, when the plane was 61 miles off the coast from North Island, Rupp said.

Officers at Miramar, including the squadron's commanding officer, cleared the pilot to go to the inland base, favoring Miramar's longer runway and assuming the pilot was closer to the base than he really was, Rupp said.

Col. Kurt Brubaker, staff judge advocate of the 3rd Marine Aircraft Wing, said no one person shouldered all the blame.

"Collectively, there were a number of judgment errors," he said.

Four officers in Miramar-based Marine Fighter Attack Training Squadron 101, including the commanding officer, have been relieved of duty for failing to follow safety procedures and allowing the Hornet to fly over the residential area. Nine other Marine and Navy personnel received lesser reprimands.