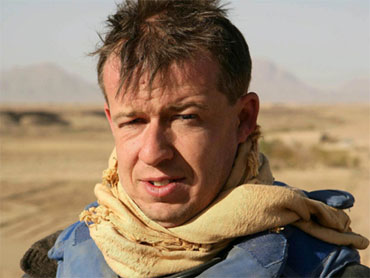 An explosion outside a village in southern Afghanistan killed a veteran British war correspondent, officials said Sunday. The blast, which also killed a U.S. Marine and an Afghan soldier, marked the British media's first death in the conflict.

With the death of Sunday Mirror journalist Rupert Hamer, a total of 18 reporters have been killed in Afghanistan since the Sept. 11, according to figures kept by the New York-based Committee to Protect Journalists.

"Tragically it was a matter of time," former British forces commander Col. Richard Kemp told Sky News television. "Our journalists, the same as other journalists, our British journalists deploying on operations with forces in Afghanistan or Iraq face exactly the same risks as our soldiers face out there."

Hamer, 39, and photographer Philip Coburn, 43, were accompanying a U.S. Marine patrol Saturday when their vehicle was hit by a makeshift bomb near the village of Nawa in Helmand, the Defense Ministry said.

An U.S. Marine was also killed in the blast, the ministry said, as was an Afghan solider. Coburn was seriously wounded in the explosion but remains in stable condition, the military said. Four U.S. Marines were also left badly hurt. No further detail was provided on their condition.

The past year has been particularly deadly for those fighting the war and those covering it. Canadian journalist Michelle Lang died late last year while embedded with Canadian troops in Afghanistan. An Afghan translator for The New York Times, Sultan Munadi, was killed in September during a rescue operation.

The Sunday Mirror said that Hamer and Coburn had flown to the region on New Year's Eve and were embedded with the American military. Their trip was to have lasted for a month, the paper said.

Both were veterans of reporting from conflict zones. It was Hamer's fifth excursion to Afghanistan, while Coburn had previously reported from Afghanistan, Iraq and Rwanda.

"Rupert believed that the only place to report a war was from the front line, and as our defense correspondent he wanted to be embedded with the U.S. Marines at the start of their vital surge into southern Afghanistan," Sunday Mirror Editor Tina Weaver said in a statement.

The Sun's Tom Newton Dunn, who used to serve as the paper's defense correspondent, said he and Hamer often spent time together in the field.

"He was extremely good at getting news, and he really understood the armed forces," Newton Dunn told the BBC. "And was never afraid to go out to places like Afghanistan or Iraq."

Government officials lined up to offer their condolences, with British Prime Minister Gordon Brown saying Hamer and Coburn brought "courage, skill and dedication to reporting from the front line," something he said ensured that the world could see and read about what international forces were achieving in Afghanistan.

British defense minister Bob Ainsworth said the pair accompanied him on his most recent trip to Afghanistan and that he was "impressed by their hard work and professionalism.

"My thoughts and deepest sympathies are with the families, friends and colleagues of both men at this extremely distressing time," Ainsworth said.