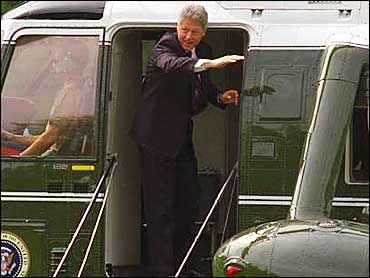 It's as much a symbol of presidential power as the White House itself.

The roar of its 3,000-horsepower engines lets people know when the president is on the move. It can get him to places much faster than his limousine - and where Air Force One cannot land.

It's Marine One, part of a fleet of gleaming helicopters in the service of the commander-in-chief, reports CBS White House Correspondent Mark Knoller.

"Well, I don't view it as a perk, " says President Bush. "I really view it as a part of the presidency because it enables me to get from point A to point B without inconveniencing a lot of my fellow Americans."

His predecessor, Bill Clinton, says, "I don't know how I would function without Marine One when I was president."

It seems to be one of the few things that presidents of different parties and ideologies can agree on, and they have Dwight Eisenhower to thank for the privilege.

Not until 1957 had an American president ever traveled by helicopter.

The first craft Eisenhower used wasn't air-conditioned or carpeted and didn't have an on-board bathroom - comforts now available on Marine One. But that first flight opened a new chapter in presidential travel.

Just last year, there were more than 240 Marine One missions for President Bush. But he remembers one above all others. It was the flight that returned him to the White House on Sept. 11.

"It was a traumatic day, of course," Mr. Bush recalls, "and I remember being glad to get back to Washington and the chopper pilot flies by the Pentagon and I saw one of the great symbols of our strength up in flames and it reminded me that we're in a new war: a visual reminder about the struggles that laid ahead for our country. It was an impressionable moment for me."

In a different way, each flight is memorable for the personnel of HMX-1, the Marine Corps unit that flies Marine One.

"We have very nearly 800 Marines, sailors and civilians in the unit, a little over 30 helicopters, so we are a fairly large unit," says Col. Stephen Taylor, the unit's commander.

Two types of choppers serve as Marine One: the older and bigger H-3 Sea King and the newer and more compact H-60 Black Hawk.

Both versions are specially-equipped to protect the president from all sorts of attack - including electromagnetic pulse and surface-to-air missiles. Not surprisingly, the Marines won't talk about it.

But what the Marines, especially the pilots, love to discuss are their jobs at HMX-1.

"You can't believe you get paid to do it," says Major Paul Johnson, a Marine One pilot:. "It's an honor to do it, and you can't think of anything better to do. I mean, it's a great time."

The pride and honor extends even to those whose job it is to keep the fleet of helicopters that serve as Marine One cleaned and shined to a blinding glare. They don't polish their own cars that much.

And the depth of dedication to the job does not go unnoticed.

"At the end of my term, I took Marine One to the Grand Canyon and protected another million acres of the Grand Canyon," Mr. Clinton recalls. "There has to be a young Marine waiting for the helicopter anywhere it lands. So we were landing on this early morning, and I looked out across this vast expanse of desert beyond the Grand Canyon, and there was this lonely Marine in his beautiful crisp uniform. So I took a quick picture of it, and I've got it up in my office in New York now. It's one of my most prized possessions."

There are other prized pictures adorning the walls of the HMX-1 ready room, of various chief executives served by Marine One.

Even before it got its name, it was being used to transport John F. Kennedy to Hyannisport. The crew let young John-John sit at the controls - a moment now rendered poignant by his death years later at the controls of another aircraft.

The photos show that Marine One serves not just presidents - but their families. Even their pets.

When he first got his dog, Mr. Clinton remembers, "I had trouble getting Buddy on board. But in the end, he got to where he loved it. He would practically run off the leash to get on Marine One."

"They don't occupy that much space, and they treat Marine One with a lot of respect. Mark, you'll be happy to hear they haven't yet once soiled the carpet on Marine One."

Yet Marine One's history is not without its quirks and blemishes. A top aide to Bill Clinton once took Marine One on a golf outing - and got fired.

Now and again, a president bumps his head while boarding the aircraft. Gerald Ford did it so often it became embarrassing - and the White House barred press coverage.

Occasionally, foreign heads of state get flights on Marine One. They once had to remove a seat so the full-figured German Chancellor Helmut Kohl could fit on board.

For security's sake, Marine One never flies alone. The spare is used as a decoy to confuse would-be attackers.

Any of the helicopters in the presidential fleet can serve as Marine One, but it only uses that call-sign when the president is on-board.

And when that happens, it's like no other helicopter in the world.