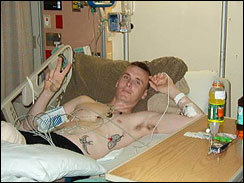 (CBS)
When CBS News correspondent David Martin and I first met Corporal Casey Owens in October 2004, he couldn't tell us much about the explosion that shattered his body and ended his life as a Marine. "I don't remember anything," Casey said from his bed in Bethesda Naval Hospital. "But I know it was a mine, like they set up an ambush."

Casey looked impossibly young as he lay there, and you could see pain in his bright blue eyes. He had been hit by 200 pieces of shrapnel. His jaw and collar bone were broken. His legs had been amputated -- the right well above the knee and the left below it. He was suffering what's called phantom pain, searing discomfort in legs and feet that weren't there anymore. Those injuries would not heal quickly.

Beset by infections, Casey went through four additional amputations on his right stump, each time losing more of the leg. He was medically discharged from the Marine Corps and then struggled with the bureaucracy of the Veteran's Administration, a system he calls "broken."

"At all costs I avoid the VA and depend on nonprofit organizations," Casey told us. One of them, the Injured Marine Semper Fi Fund, has supported Casey and other wounded troops for the last five years. It was stated by a single person responding to aching need.

As Marines launched the battle of Fallujah in 2004, planes full of wounded started coming in to Camp Pendleton California. Karen Guenther, a nurse working in the military hospital, saw not only the devastating injuries but families living hand-to-mouth trying to cope with the demands providing comfort. When a Marine is injured, she realized, the family is injured.

What began as a single inspiration has grown into an organization which has given more than $30 million to Marines, sailors and soldiers -- $30 million from citizens who wanted to help young men and women recover from wounds suffered on the battlefield. Is this support the government should be providing? Karen Guenther says "we the American people" also have a role to play.