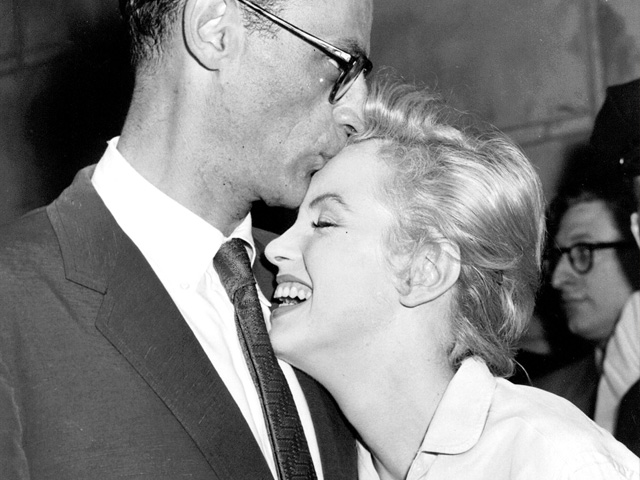 60 Minutes Overtime shares one of our favorite stories from the 60 Minutes archives. Originally aired on November 15, 1987, it's a revealing interview between Mike Wallace and the man who, in many respects, was an unlikely match for Monroe: the star's husband for 5 years, Pulitzer Prize-winning playwright Arthur Miller.

His name graced the pages of the theater section, while hers was splashed across tabloids and gossip columns. But in fact, Miller said, Monroe was the innocent one, particularly as she moved into the role of wife and step-mother. But at the end of the day, "she wanted to be a star," Miller told Wallace, and that's ultimately what killed her.

Arthur Miller was 72 years old at the time of the interview, and 25 years had passed since the death of his former wife. Nevertheless, Wallace managed to strike a chord with Miller when the two men reflected on Monroe:

WALLACE: Your face changes when you talk about her.

WALLACE: Your face changes when you talk about her.

MILLER: In what way?

WALLACE: Why? What did it do to you?

MILLER: Well, it's a defeat. It always is.

During their relationship, Miller wrote the screenplay for "The Misfits," with the lead role played by Monroe. She played a wounded young woman, who falls in love with a much older man. It would be her last film.

Despite the success of 1961's "The Misfits," Miller's marriage to Monroe had been struggling for months, and the couple ultimately separated. In addition to drug and alcohol dependency, Monroe had endured several miscarriages and was battling depression.

"I guess to be frank about it, I was taking care of her. I was trying to keep her afloat," Miller told Wallace. "She was a super-sensitive instrument, and that's exciting to be around until it starts to self-destruct."

When Wallace asked Miller if he knew Monroe's life was destined for disaster, he said, "I didn't know it was doomed, but I certainly felt it had a good chance to be." Less than two years later, Monroe was found dead at the age of 36 in her California home.