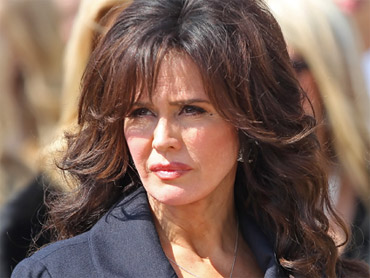 Now, she's going public for the first time about the tragedy, discussing it with Oprah Winfrey.

As CBS News Correspondent Michelle Miller reports, Osmond told Winfrey about Michael's depression, and the helplessness she felt when he died.

Michael jumped from his high rise apartment in Los Angeles on Feb. 26.

Osmond reveals that he had told her he was depressed and felt like he had no friends. She told him she'd be back in town on a Monday. Michael killed himself on the Friday before.

"I told him," she said as she started to cry. "Sorry. I told him, I said, 'Mike, I'm going to be there Monday and it's going to be OK.' But depression doesn't wait 'til Monday."

Michael had left a note saying his long battle with depression made him feel he had no friends.

"When I heard him say to me, 'I have no friends,' it brought back when I went through depression because (you), you know, really feel so alone," Osmond said. "I'm not a depressed person, but I understand that place, that darkness."

"Because," Winfrey pointed out, "you are talking about postpartum (depression)."

"And if I went through that whole experience just to understand my son, it was worth it to me," Osmond responded.

Osmond suffered the postpartum depression after the birth of her third child. There were rumors that she, too, had attempted suicide -- something she has denied.

She became a teenage star in the 1970s with a variety show she shared with brother Donny Osmond.

In the interview, scheduled to air Thursday, Winfrey asked Osmond if she was second-guessing herself over her son's suicide.

"Are you still in the 'what ifs? What if I picked the phone? What if I had done...' Have you been able to make peace with the fact that you did everything that you could do?"

Marie is reuniting with Donny for a Christmas show in New York next month. She told Winfrey the stage was her "safe place."