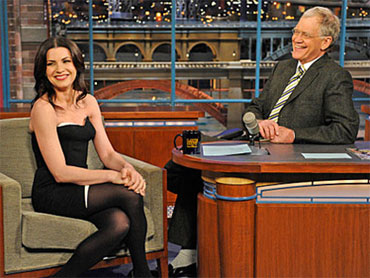 Julianna Margulies is a fan of Julia Roberts - but didn't enjoy being her waitress before she was famous.

"The Good Wife" star appeared on the "Late Show" Tuesday night, and told host David Letterman about her experience working at a high-end New York restaurant while she was trying to start her acting career.

Margulies said that Roberts is "lovely, when you're not waiting on her."

But all is well between the two stars - three years ago, Margulies told Letterman, both actresses were starring in plays on Broadway. While out with other members of the Broadway community after a performance, Margulies brought up the restaurant incident to Roberts.

Roberts apologized, she said, and bought her dinner.

She also told the "Late Show" host that the restaurant's famous clientele and high-pressure atmosphere made her anxious.

"I was always itching out of nerves," she said.

"Customers like that in a waitress," Letterman quipped back.

Margulies also talked about her upcoming film "City Island," a comedy she stars in alongside Andy Garcia. In the film, which takes place in the Bronx neighborhood of the title's name, Garcia, who plays Margulies' husband, divulges his biggest secret in a drama class, causing pandemonium to ensue.