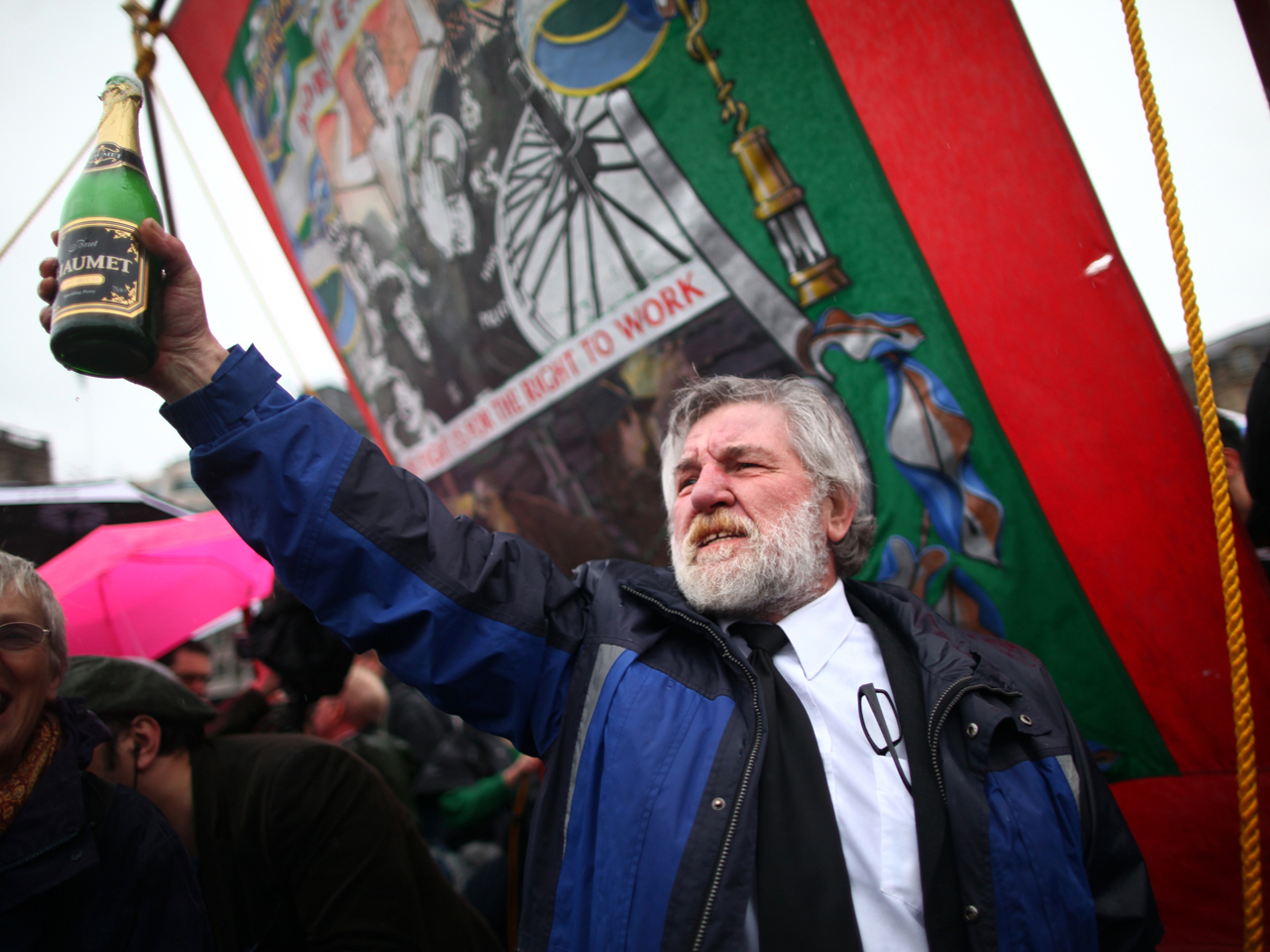 Thatcher's most strident critics had long vowed to hold a gathering in central London on the Saturday following her passing, and the festivities were an indication of the depth of the hatred which some Britons still feel for their former leader.

"We've been waiting a long time for this," Richard Watson, a 45-year-old from eastern England wearing a party hat, said. "It's an opportunity of a lifetime."

CBS News correspondent Charlie D'Agata reports from London that Thatcher's detractors have been holding "death parties" in the British capital all week long. Saturday's protest was arranged two decades ago.

As a huge effigy of Thatcher — complete with hook nose and handbag — made its way down the stairs in front of the National Gallery, the crowd erupted into cries of "Maggie! Maggie! Maggie! Dead! Dead! Dead!" and sang lyrics from the "Wizard of Oz" ditty "Ding Dong! The Witch is Dead."

The song's sales has raced up the music charts, D'Agata reports. It's No. 1 on British iTunes, putting the BBC's radio countdown show in an awkward position.

Hundreds of people clutched their umbrellas in the rain between Nelson's Column and the National Gallery on the square, drinking cider or Champagne. The mood appeared festive and the celebration was peaceful, although there was a minor scuffle with police at one point. Police said they made nine arrests, most for drunkenness.

Britons remain deeply divided over Thatcher, who died Monday aged 87, and the debate over her legacy has revived the strong feelings that marked her more than decade-long term in office. Thatcher's funeral is Wednesday and police are bracing for possible trouble along the procession route in central London.

Widely respected on the right for reviving Britain's economic fortunes and besting Argentina in a war over the Falklands, Thatcher is reviled by some on the left for her bruising confrontation with the country's union movement and her perceived indifference to its working class.

Some in the crowd said they didn't want to dance on Thatcher's grave, but they did want to mark their opposition to what she stood for.

"I'm not here to celebrate Thatcher's death," Andy Withers, 49, said. "But what's going on tonight is part of the legacy she created."

David Karpf, who studies online campaigns, said the chart battle was an example of a new kind of protest enabled by social media — "A way for people to signal protest en masse without shouting from the rooftops."

"It's a form of symbolic protest," he said.

The unusual campaign has caused a headache for the BBC. With the ditty near the top of the charts, the broadcaster faced the prospect of airing the words "The Wicked Witch is Dead!" on its Sunday countdown show, just days before Thatcher's funeral, scheduled for Wednesday.

Some lawmakers from Thatcher's Conservative Party had called for the publicly funded broadcaster to drop the song, while others warned that such a move would mean censoring a form of dissent.

The BBC, caught between allegations of censorship and complaints about poor taste, split the difference, saying it would broadcast only part of the tune — along with a news item explaining why it was there.

BBC director-general Tony Hall said that while the broadcaster found the campaign "distasteful and inappropriate," he and other executives had decided the song should not be banned — but should not be broadcast in full, either.

"We have agreed that we won't be playing the song in full, rather treating it as a news story and playing a short extract to put it in context," he said in a statement.

Ben Cooper, controller of Radio 1 — which broadcasts the chart show — said the clip would be "four or five" seconds long, though he did not say what part of the song would be aired.