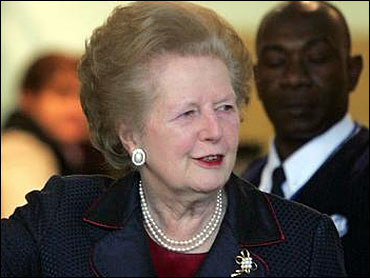 Former Prime Minister Margaret Thatcher was hospitalized in stable condition in central London on Saturday and was under going medical checks, authorities said.

St. Thomas' Hospital said the former leader, 82, was expected to spend the night in hospital for observation.

"We can confirm that Baroness Thatcher has been admitted to St. Thomas' Hospital and is expected to remain in hospital overnight for observation," the hospital said in a statement. "Her condition is stable and she is speaking to the medical staff who are caring for her."

Earlier this year, she urged members of her Conservatives Party to "hold firm to their beliefs" as she was honored with a statue at the party's headquarters.

"Today, as we face the challenges of the future, let us remain steadfast and sure. Let us set a clear course for our country," she said.

Nicknamed the "Iron Lady," Thatcher was prime minister from May 1979 until her resignation in November 1990. She was the first leader to win three elections in a row.

Thatcher dominated British politics in the 1980s and was a firm supporter of her ideological colleague President Reagan.

She was also a divisive figure and left her Conservative Party a bickering shambles after she fell from power in 1990.

She was given a clear bill of health by doctors in December 2005 after spending a night in the Chelsea and Westminster Hospital in London for tests after feeling faint.

The hospital described her as a model patient.

In March 2002, She cut back her workload after doctors said she had suffered a series of strokes.