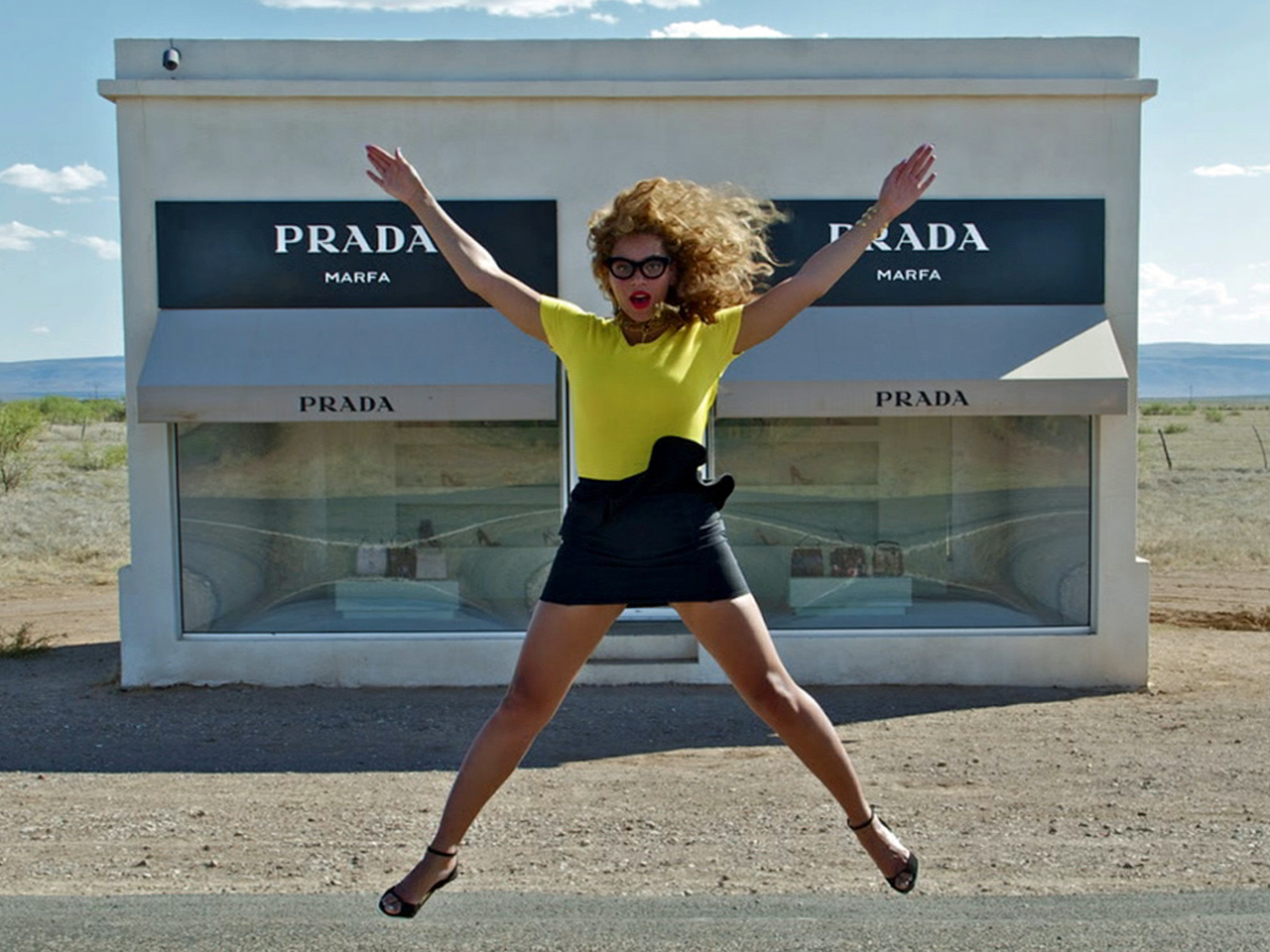 The following is a script from "Marfa, Texas" which aired on April 14, 2013. Morley Safer is the correspondent. David Browning and Jonathan Schienberg, producers.

It sometimes seems America is a country hopelessly divided -- by class, by politics, by culture. Tonight, we once again go to a remote place where few have trodden before -- Marfa, Texas -- for a lesson in artful coexistence. Marfa is in cattle country, the high desert of far West Texas. Like many small towns, it's come close to extinction.

But today, Marfa lives on, is even thriving: its renaissance spurred by the arrival of a host of young, cutting edge artists. Mixing cowboys and culture might seem like a bad idea, but it's made Marfa a capital of quirkiness. And, as we reported in April, it's produced a harmony as sweet as the country music that fills the air.

Out on the lone prairie -- a 200-mile drive from the nearest airport -- stands Marfa, population 2,000. The train doesn't stop here anymore, and at first glance the place may look half dead. But look closer. Marfa today is an eccentric Tex-Mex stew of art galleries, tourists, cowboys and characters.

Dan Dunlap: It's a freedom loving town. People are allowed just to live and let live.

As mayor, Dan Dunlap presides over a town where old Marfans saddle up to ride the range and the new ones paint and sculpt. All in a very quiet place.

Dan Dunlap: No sir, crime is not a problem.

Morley Safer: When was the last murder you had in Marfa?

Well, there was one. The Coen brothers shot their movie "No Country For Old Men" outside town. They needed a local to murder, one with some acting experience.

Chip Love: I told them I was in "The Wizard of Oz" in high school and they said, "That's perfect."

So Chip Love - a local banker - found himself face-to-face with that loco hombre Javier Bardem.

Morley Safer: It's pretty unusual for the town's leading banker -

Chip Love: Yeah, I'm the town's leading banker. The only one, yeah.

Morley Safer: - to get shot in the head by a crazed crook.

Chip Love: Well, I think a lot of people would like to see their banker shot right now.

Actually, the movies and Marfa go way back. In 1955, the Texas epic "Giant" was filmed here. And townspeople got to watch Rock Hudson roping, James Dean riding, and Elizabeth Taylor - well, just being Elizabeth Taylor. There's a shrine to the movie in Marfa's Paisano Hotel.

But these days, watching the passing parade, you're not quite sure if you're in Mayberry or Greenwich Village. For old Marfans, there's the gun show.

For new Marfans, a symposium on politics, culture, climate and sustainability. And, for reasons we weren't able to pin down - adolescent hula dancers.

Buck Johnston: I mean, it's nutty. It's just this cultural little hub in the middle of nowhere. We think it's the best small town in America.

Camp Bosworth: Don't tell anybody. Edit that out, please.

Camp Bosworth and Buck Johnston are members in good standing of the Marfa new wave. Their gallery packed with Camp's Texas-size wood carvings.

Camp Bosworth: This is a six-shooter, it's gold leaf. And this turns, you know, I've carved it with various details...

There's also the pistol that doubles as a bar.

A few blocks away, painter Ann Marie Nafziger is hard at work. An Ohio native who moved here from Portland, Oregon.

Morley Safer: Your first trip to Marfa, what did you make of the place?

Ann Marie Nafziger: I was astounded by the landscape coming in. The land and the light. It's an incredible place to look at as a painter. I love living here.

[Maryam Amiryani: With the Elvis...]

Maryam Amiryani paints still lifes and cultural icons. She was born in Iran, traveled the world, and wound up in Marfa.

Maryam Amiryani: My husband and I wanted to move somewhere to live a simple life close to nature, to paint more.

Morley Safer: What did this place have that others might not have had?

Maryam Amiryani: It just seemed a bit more extreme. And that appealed to us.

If you want extreme, try the weather in Marfa.

It's best described as: all over the map.

[Music: Well the wind outside is howlin', coyotes cry in fear, welcome to West Texas, you're gonna like it here. ]

Chip Love: I've always been amazed at the courage these people have that come out here and not really sure how they're going to make a living. And they just show up because it feels right.

The new Marfans have transformed the place. Padre's, the local watering hole, was once a funeral parlor. Ballroom Marfa, a gallery, was a Mexican dance hall. Camp and Buck live in a converted church. And there are further signs this is not your grandfather's Marfa.

Yoga fans can catch up on their chakras and their downward dogs at the town bookstore. And also read up on abstract expressionism. Tim Johnson - a poet/philosopher - runs the place.

Morley Safer: This is a remarkably big bookshop for a very small town.

Tim Johnson: Yeah, it really is. We have like 60 to maybe 80 or 90 people who come out for a poetry reading. Ah, which is strange, and it has something to do with the fact that there are basically no other competing entertainment options.

There's not much competition on the road, either. Marfa has one stop light. The next one is 56 miles away.

Camp Bosworth: Every now and then you'll have to wait for, like, five cars. And you really do find yourself going--

Buck Johnston: What is goin' on?

Camp Bosworth: What is goin' on?

Buck Johnston: Who let the traffic out?

It's also just about the smallest town anywhere to have its own public radio station.

Tom Michael: If cattle could fill out pledge forms, we would have a station.

Tom Michael: You know, we got some great cranks in West Texas, sweet curmudgeons. We really love hearing from them.

Morley Safer: Tell me about some of them.

Tom Michael: Tuggy Lancaster. She passed away last year. She would call up and say, "My donkeys want to hear classical and jazz."

Ellery Aufdengarten is a local rancher born and bred in the wide open spaces.

Ellery Aufdengarten: I mean, how can you beat this? Look. It doesn't get any better than this.

He might well agree with Churchill who said there's something about the outside of a horse that's good for the inside of a man. And though he admits to understanding cattle better than understanding modern art, he gives the new artistic Marfans a tip of his Stetson.

Morley Safer: You think it's been good for the town?

Ellery Aufdengarten: I would have to say yes. I mean, I don't know what it would have looked like if they hadn't come.

Morley Safer: Do you mix at all with the artsy people?

Morley Safer: What do you make of 'em?

In a way, all the creative souls who've landed here are the spiritual descendants of this man: the late Donald Judd, an artist who headed west in the 1970s.

Rob Weiner: He wanted to get out of New York City. It had become too claustrophobic and he wanted to go to a place that was much more open, as far as the landscape was concerned. And he loved the land.

Rob Weiner worked for Judd, who set up shop on a deserted Army base. He's now associate director of a museum housing works by Judd and other minimalist artists.

Rob Weiner: Judd wanted a kind of museum that would give a different experience of how the art and the architecture and the landscape work together.

Today, antelope play among Judd's boxes. Boxes, little boxes and bigger boxes, boxes all in a row, not made out of ticky-tacky, but of concrete.

Joe Cabezuela: We don't understand the art. It's different, you know. We're used to portraits of cattle, windmills, cowboys--

Joe Cabezuela is a community leader among Marfa's Hispanics, who make up 75 percent of the town. It's a place where tolerance once had its limits, depending on which side of the tracks you came from.

Joe Cabezuela: Back when I was growing up a Mexican kid couldn't go out with an Anglo girl. I mean, it was, you know, they still went out. The parents didn't know about it, but.

But these days, Anglos, Hispanics, tourists and Marfans old and new all rub elbows.

[Woman: Do you roast the jalapenos?]

And most everybody agrees the newcomers have given Marfa a new face.

Joe Cabezuela: Marfa would have been a little old dusty town, had they not come in and sort of like revived it, you know.

Morley Safer: Has the economy improved for the Hispanic community?

Joe Cabezuela: It has, because of the jobs, I believe.

And with the artists and the tourist dollars, the town now has not one, but two upscale restaurants. At El Cosmico, sort of a hip trailer camp, you can sleep in a teepee or an airstream. And if you decide to stay on, you'll quickly learn the basic facts of life in a very small town. Number one: be nice.

Ann Marie Nafziger: There's a reliance on other people. You should make sure you're getting along with your neighbor because you'll probably need them.

Tom Michaels: I mean, the joke is you don't need to put on your turn signal 'cause they know where you're going.

Morley Safer: So no secrets?

And number three: no frills.

Rob Weiner: It's still a hardscrabble life style. There's no pharmacy. There's no dry cleaner. It's hard to get things.

And newcomers can find the wide open spaces claustrophobic and the sound of silence deafening, especially if you're a transplanted New Yorker.

Morley Safer: How often do you have to get out of here?

Rob Weiner: You know, between six and eight weeks, I'm usually ready for a jolt of city life.

And on your way out of town, you'll want to stop at the most bizarre spot in these parts. There at sundown, like a desert mirage - is Prada Marfa.

Boyd Elder: There's been people stopping, thinking it's a store. Slammin' on their brakes.

It's full of thousand dollar Italian shoes and $2,000 bags. But the door is always locked. As custodian Boyd Elder explains, Prada Marfa is not a store but a statement, put up in the middle of nowhere by two German artists.

Boyd Elder: They wanted to see what happened by putting it here. To see if it would stay and to see what the results would be. And they want some kind of like, public response to their art.

And they got it. Pilgrims to Marfa can't resist a snapshot. Beyonce, for instance, was swept off her feet. Others weren't.

Boyd Elder: I mean, it's been vandalized. Some people love it, other people hate it.

Morley Safer: What about the folks in Marfa?

Boyd Elder: I think a lot of 'em think it's just a joke.

Morley Safer: What do you consider it to be?

And so, we bid a fond farewell to the magic kingdom of Marfa. Many moons ago, somebody named the place after a heroine in the novel "Crime and Punishment." But this Marfa has very little crime and thus virtually no punishment. Except of course for the long and lonely road.