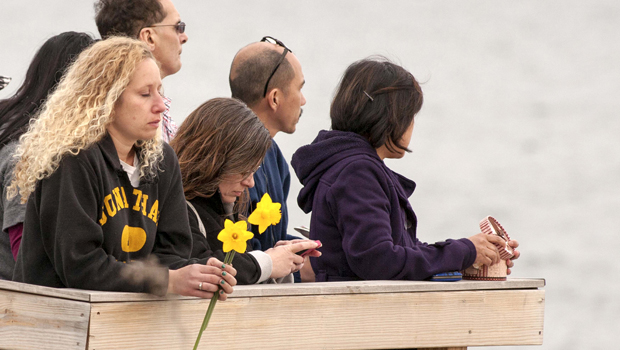 HARTFORD, Conn. -- In the days before Maren Sanchez was stabbed to death inside her high school, her focus was on the junior prom she was helping to plan for Friday night.

She had posted on Facebook a photograph of herself wearing a blue prom dress and was looking forward to attending with a new boyfriend. She even took a break from her Thursday drama group to get her nails done.

The day of the big dance, however, Sanchez was attacked and killed in the hallway, and a 16-year-old male student has been charged with her murder. Police are investigating whether Sanchez was stabbed after turning down the suspect's invitation to prom.

"He asked her to prom; she said, 'No, I have a new boyfriend,'" junior Jill Davis told CBS News. "He strangled her and then slit her throat and then stabbed her in the arm and then ran, and the cops got him."

Now the dance has been postponed indefinitely and students Instead gathered Friday night for a candlelight vigil, with counselors on hand for anyone who needed them.

Family members and friends at the Jonathan Law High School in Milford were left reeling from the attack on the 16-year-old Sanchez, an outgoing member of the National Honor Society who played guitar and was active in drama and other school activities.

"The unprovoked attack on Maren this morning has unfortunately for our family resulted in the permanent loss of Maren Victoria Sanchez, a bright light full of hopes and dreams with her future at her fingertips," her cousin, Edward Kovac, said Friday, reading from a statement prepared by the family.

On Thursday at school, Sanchez and a friend talked excitedly about their plans for the upcoming dance.

That night, she was helping to paint the set for a high school production of "Little Shop of Horrors" when she asked to be excused to have her nails done, drama adviser Michael Mele said.

"So here is this girl with her freshly painted prom nails, painting the set, and just having a great time with her classmates talking about plans for the prom and plans for after prom and going on a double date with another one of the drama kids and her new boyfriend," Mele said.

On Friday morning, students were gathered in an auditorium waiting for information on what had happened when Langston said a teacher came and told them Sanchez had been stabbed.

"She basically just explained to us that Maren Sanchez got stabbed in the throat for saying no about going to prom" with the suspect, said Langston, who described herself as one of Sanchez's closest friends.

The suspect, whose name was not released, was charged with murder as a juvenile offender. He was being held in police custody at a medical facility. Police said they recovered a knife as evidence, obtained a search warrant and searched the suspect's home.

The suspect could be charged later as an adult. State's Attorney Kevin Lawlor said several factors go into making that decision, including the seriousness of the charges. He said the only prohibition in trying a murder suspect as an adult would be if that person was under 14 years old.