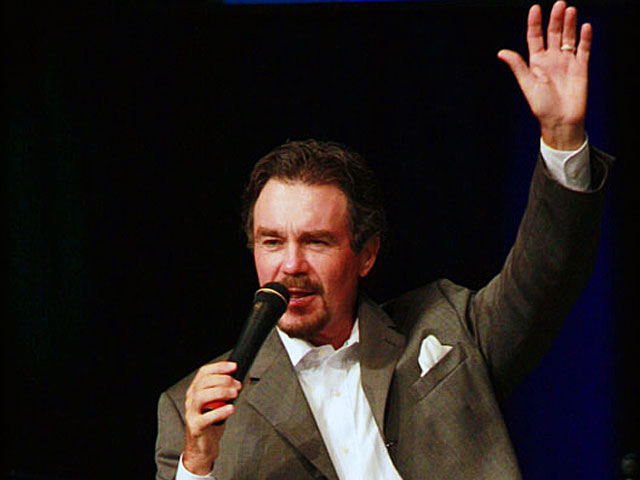 NEW YORK (CBS/AP) The Rev. Marcus Lamb, a prominent Dallas-based Pentecostal televangelist, came clean on national television about an affair he had years ago rather than pay the people he says are trying to blackmail him out of $7.5 mil of "God's money," Lamb and his wife announced Tuesday.

Lamb, who created DayStar Television Network with his wife Joni, said he and his wife had healed their marriage and had hoped to keep his adultery private, but went public because they would not pay extortionists.

"They're trying to take our pain and turn it to their gain," said Lamb, during a one-hour live broadcast with his wife by his side and supporters surrounding him. "We're not going to take God's money to keep from being humiliated."

DayStar, based in Dallas, airs some of the highest-profile evangelists in the world, including Joel Osteen, T.D. Jakes, Benny Hinn, Kenneth Copeland, Creflo Dollar and Joyce Meyers.

The Lambs' supporters on the broadcast repeatedly described the affair and the extortion plot as an attempt by the devil to discredit the evangelist couple and their ministry, although Lamb has said that only he is to blame for his wrongdoing.

DayStar is rooted in Pentecostalism, the Christian tradition known for its spirit-filled worship, and its belief in modern-day miracles and everyday battles with evil influences.

Joni Lamb described her husband's affair as "an emotional relationship" with a woman that became "an improper relationship." She confronted her husband and the two decided to undergo Christian counseling with Fred and Anna Kendall of the Life Languages Institute, which specializes in training communicators.

Marcus Lamb said he took responsibility for the affair by confessing what he had done to his wife's parents and asking some members of the DayStar ministry to help hold him accountable for his promise to stay faithful.

A spokesman for the Lambs, Larry Ross, said they went to authorities with their allegations, but he said he could not discuss specifics for fear of interfering with any investigation. He said the extortion attempt was made within the past few weeks.