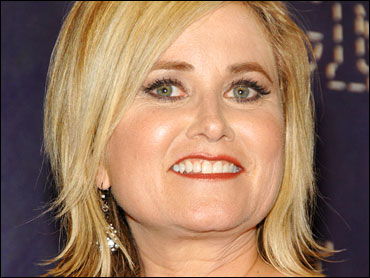 Fans of "The Brady Bunch" know Maureen McCormick as Marcia Brady, the wholesome older sister on the classic TV comedy about a blended family.

But in her new memoir, "Here's the Story: Surviving Marcia Brady and Finding My True Voice," the actress writes of her romance with TV sibling Barry Williams, who played Greg Brady, dates with Michael Jackson and Steve Martin, her addictions, depression, and trading sex for drugs.

Things became hot and heavy while McCormick and Williams were filming episodes in Hawaii.

"We couldn't hold back any longer," she writes in the book published by William Morrow. "It was our first kiss, and it was long, passionate and deep. It was wonderful, too, though as we continued to kiss and press against each other so closely that we could feel each other's body heat, a part of me - a tiny part, admittedly - said to myself, `Oh my God! I'm kissing my brother. What am I doing?"'

Now 52, McCormick - who endured a battle with drug addiction and depression - also discusses her dates with Martin and Jackson. It was several years after "The Brady Bunch" ended that McCormick went out with Martin, who had asked for the actress' phone number through friend Chevy Chase.

"I remember him being a very good kisser," McCormick writes about Martin. "But I was insecure and either high or spaced-out (most likely both), and I didn't laugh at his jokes.

Paramedic: Officer Was In "State Of Rage"

"Though Steve was too polite and confident of his talent to say anything, I'm sure my inability to carry on a normal conversation or respond intelligently put him off," she writes. "We never spoke again after that date. I've always regretted my behavior because he impressed me as an extraordinary guy. I would've enjoyed a second date."

McCormick's time with Jackson was innocent. They met while she was starring on "Brady" and he was part of the Jackson 5.

"Once we went ice-skating and he held my hand as we glided around the rink," the book recalls. "I wondered if he might try to kiss me, but he didn't. After another outing, he did give me a kiss goodbye. But it was only a gentle peck on the cheek."

There were more men in McCormick's life, which spiraled downward into substance abuse and depression as she struggled to reconcile her Marcia Brady image of the girl next door with her private pain.

"I always had this smile on my face," she said in September 2007 in a video released by HarperCollins, "but deep down inside, I felt like I was crying, and very sad."

"Yes, I knew that there were things going on that were not particularly OK," says Williams, "and I empathized with the pressure of having to be this smiling, cheery, wonderful, no problems, no issues kind of image and trying to live up to it."

"When you're a beautiful girl," says TV Guide Senior Correspondent Zoe Alexander, "and you're in Hollywood, and you're swept up in a lot of the drugs sex and rock 'n' roll that this town is full of, you know, it's easy to fall into that. ... But the fact that it was somebody who appeared so together on the screen is what's so shocking about the whole thing."

In the book, hitting stores Tuesday, she discusses cocaine binges and parties at the Playboy Mansion and the home of Sammy Davis Jr., an unwanted pregnancy and trading sex for drugs. McCormick was not available for comment on her book.

McCormick was 14 when "The Brady Bunch" debuted on the ABC network, running from 1969 to 1974. Despite her role as a sunny Miss Perfect, she grappled privately with anxiety and insecurity, the youngest of four children born to a mercurial father who abused and cheated on their mother.

"As a teenager, I had no idea that few people are everything they present to the outside world," she writes. "Yet there I was, hiding the reality of my life behind the unreal perfection of Marcia Brady. ... No one suspected the fear that gnawed at me even as I lent my voice to the chorus of Bradys singing, `It's a Sunshine Day."'

When the series had its final bow, she took up a hard-partying lifestyle in Hollywood, using drugs including cocaine and Quaaludes. She struggled to regain her earlier success, landing some TV and movie roles, but developed a reputation for unreliability due to her addiction, even botching an interview with Steven Spielberg for a role in "Raiders of the Lost Ark" because she was high.

After interventions, stints in rehab and experimental therapies, McCormick began getting sober in 1985 when she married actor Michael Cummings, with whom she has a daughter, Natalie. She continued to fight depression through therapy, medication and the help of "Brady" cast mates.

McCormick, who is also a singer, starred on the Country Music Television reality series "Gone Country" and "Outsider's Inn." She also confronted her weight issues several years ago as the winning contestant on the VH1 reality show "Celebrity Fit Club."

As for her iconic role, "I'll always be struck by how much a part of people's lives Marcia is and always will be. But now I'm not bothered by the connection. It took most of my life, countless mistakes and decades of pain and suffering to reach this point of equanimity and acceptance," she says.

In the HarperCollins video, she adds, "It's been kind of a roller coaster ride. At one time, it was wonderful, at one time, it was awful to be her. And I've come to this point where I really love her and accept her."

On The Early Show Tuesday, marriage and family therapist Dr. Shannon Fox, of MomLogic.com applauded McCormick, saying, "I think Marcia -- Marcia. Maureen -- is very courageous in coming out with this mental health issue. It's so easy, I think, these days, for stars to say, 'I was addicted to drugs, I was, you know, I was in rehab, in and out of rehab,' but she's really saying the underlying issue was this sadness, this depression, and she was self-medicating with the drugs, and I think that's a really courageous stance for her to take."

Fox added, "For us to see that someone who seemed so perfect on the outside really was struggling with self-esteem and body image issues and eating disorders is really good for people to know. You can't live up to that ideal. It's really a false ideal, and "The Brady Bunch" was THE ideal family, even. I think that, for women, especially, to see that that image is not all it's cracked up to be is a really strong message."

The book, Fox says, is part of McCormick's healing process: " The Maureen McCormick that you see today seems so much more confident. She seems like she's worked through and really walked through that depressed time, that time of self-doubt and she seems to have come out of it. So, I think definitely, coming out and saying, taking a strong stand and saying, 'I was depressed, I was self-medicating, and I'm not doing that anymore' is definitely part of her hearing healing."