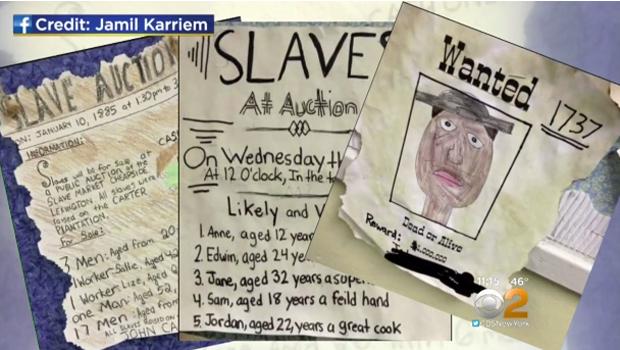 MAPLEWOOD, N.J. — When it comes time for fifth graders to learn about the history of colonization and slavery, it’s always a sensitive subject.

As CBS New York reported, parents like Tracey Jarmon-Woods said it became even more painful after what took place in a 5th grade classroom at her son’s school in Maplewood.

“There was a sale of a black child by white children in the classroom,” Tracey Jarmon-Woods said, “If you’re demoralized — sold on a block in 2017 — it may affect you the rest of your life.”

A mock slave auction earlier in the month was hotly discussed during after school pickup outside Jefferson Elementary School, and later at a board of education meeting.

“I’m disgusted, really disgusted a child was bought. That doesn’t make any sense,” one parent said.

In a letter sent to parents, the principal said the impromptu reenactment of a slave auction by students was done while the teacher was out for a medical procedure and a substitute was in charge of the class.

It’s not the first time the district has come under fire for its curriculum on colonization. Around the same time as the mock slave sale, controversial posters at another district school — South Mountain Elementary — offended several parents.

“We have to do better for our children,” Elissa Malespina said.

“There was no intent to be provocative or demeaning,” he said, “The context is important to know.”

A school social worker will speak with 5th graders at Jefferson Elementary on Tuesday.

The district said it is planning a town hall event with parents and their kids on the topic as well.