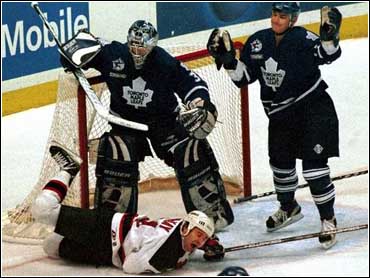 Heading down the stretch, the Toronto Maple Leafs are starting to get back on track, something that can't be said of the New Jersey Devils.

Igor Korolev and Garry Valk came within a second of scoring short-handed goals when they tallied 17 seconds apart, and Toronto defeated New Jersey 3-1 on Friday night, extending the Devils' winless streak to five, their longest since 1995.

Curtis Joseph had 30 saves as the Maple Leafs won their second straight after going winless in six (0-5-1). Toronto is 2-0-1 against New Jersey this season.

"It was a huge win for us," Valk said. "We were gaining confidence shift after shift. Going from where we were last week, it was a huge step."

Maple Leafs captain Mats Sundin said no one on the team wanted to take a step back after beating Phoenix on Wednesday.

"It was a great test for our team playing the best team in the conference," Sundin said. "We came out on top and I thought we were the better team pretty much the whole game. That's a great sign for us. It answers a lot of question marks about our team."

The loss was the fourth straight for New Jersey (0-4-1). The last time it lost that many in a row or was winless this long was in a six-game streak in November 1995. The Devils' frustration showed at the final buzzer as the teams got into a shoving match in front of the Toronto bench.

"I won't call it a skid, because that's usually followed by a crash," Devils center Bobby Holik said. "All I can say is it's pobably better for it to happen now than a month from now. Obviously no one is enjoying this but what can you do. We're just not playing well. It's a long year."

The only goal Joseph gave up was by Patrik Elias with the Devils on a two-man power play.

However, the Maple Leafs broke the game open with the Devils on a power play.

The Devils were on a power play when Korolev snapped a 1-1 tie at 6:50 of the third period.

Korolev made the play at both ends of the ice. He knocked down Devils defenseman Scott Niedermayer during a battle along the boards, setting up a 3-on-2 break. Passes went from Korolev to Dmitry Yushkevich to Tomas Kaberle back to Yushkevich back to Korolev, who beat Chris Terreri from the right circle.

Valk got his eighth goal by blocking a shot by New Jersey defenseman Sheldon Souray and beating Terreri on a breakaway just as Darcy Tucker was stepping back onto the ice after a hooking penalty.

"Cujo made some big saves and then we went down and got the shorthanded one," Valk said. "Then my goal. Obviously it stunned them."

Elias tied the game 1-1 at 12:04 of the second period as the Devils capitalized on a couple Maple Leafs mistakes on and off the ice.

The first error came when someone on the Toronto bench said a little too much to referee Mark Faucette and picked up a bench minor. The Maple Leafs killed off all but 20 seconds of that penalty when Tucker took a boarding penalty, creating a two-man advantage.

Thirteen seconds later, Elias got his 26th goal, taking a nice pass from Petr Sykora and beating Joseph under the crossbar.

After failing to convert on five power plays and 15 shots against Terreri in a scoreless first period, Toronto needed only 2:18 to get on the scoreboard in the second. Yanic Perreault got the goal on a quick rush, putting in the rebound of a shot by Tucker.