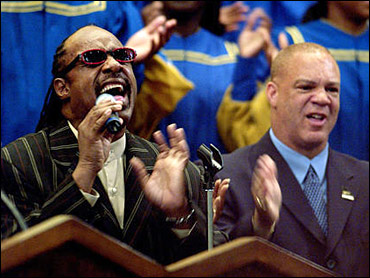 Friends of Ray Charles sent the late singer off on a high note Friday.

Charles' son, the Rev. Robert Robinson Sr., started the service with a rousing tone, clapping his hands throughout a reading from the Old Testament. Then the Rev. Jesse Jackson added a New Testament reading threaded with his own inspirational message.

Friends and family of the singer, who had been blind since age 7, applauded and cheered.

Willie Nelson performed a tearful rendition of Charles' signature hit, "Georgia On My Mind," but wasn't allowed to leave the pulpit on a sad note — Charles' longtime manager, Joe Adams, teased him about always losing chess games to Charles.

Nelson joked that after his last loss to the sightless performer, he asked him, "Next time we play, can we turn the lights on?"

King, who played a mournful ballad on his guitar, held back tears as he paid tribute to Charles.

"He's a genius," King said. "One of the greatest musicians I ever met."

Wonder, who's also blind, said that when he first heard recordings of Charles he didn't know they shared a disability.

"Long before I knew we had so much in common, I knew him as a man and a voice that touched my heart," Wonder said, his fingers trailing over piano keys. "His voice made me feel like I wanted to love deeper, to care more and reach out and touch the world."

Another tribute came from actor-director Clint Eastwood, who interviewed Charles for an extensive segment of the documentary "The Blues."

"I'm here to join the chorus to praise Ray. He was called a genius," Eastwood said. "Certainly Ray was supertalented, but talent comes with a lot of work. I don't think I've met anyone with a stronger work ethic than Ray Charles."

"He worked so hard to be a perfectionist and entertain us all," he said. "He was a teacher who taught us about the blues, to people who didn't understand the blues. He taught us about country music. ... He reinstilled our interest in patriotic songs. Anything he touched was just good."

The funeral ended with the opening of Charles' casket and the playing of his recording of "Somewhere Over the Rainbow" with Johnny Mathis as hundreds of mourners passed by.