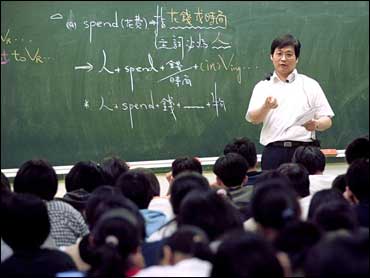 About half of the world's 6,000 languages are under threat of disappearing under pressure from more dominant tongues or repressive government policies, a new study says.

From France and Russia to the Americas and Australia, minority languages and the heritage that goes along with them are at risk of dying out, according to a UNESCO study to be released Thursday.

"Today, at least 3,000 tongues are endangered, seriously endangered or dying in many parts of the world," said a statement by the Paris-based United Nations Educational, Scientific and Cultural Organization.

"With the death and disappearance of ... a language, an irreplaceable unit in our knowledge and understanding of human thought and world-view is lost forever."

The 90-page study, "Atlas of the World's Languages in Danger of Disappearing," said the Americas and Australia had the worst record. In Australia, hundreds of Aboriginal languages are now extinct as a result of harsh assimilation policies in place until the 1970s.

"In the United States, less than 150 Indian languages have survived out of several hundreds that were spoken before the arrival of the Europeans," the study said, adding that discrimination lessened in the 1970s but English-only policies increased with a wave of conservatism in the 1980s.

The study identifies "crisis areas" such as Taiwan, where more than half of the 23 local languages "are yielding to the pressures of Chinese," and New Caledonia, where French has replaced regional tongues.

It also lists about 50 languages at risk in Europe, including 14 languages in France and several of the Saami or Lappish tongues spoken in Scandinavia and northern Russia.

According to the study, a native language can disappear when its speakers relocate and are required to speak the dominant tongue to get a job and functin in the new society, or because they confront a more aggressive or economically stronger culture.

In Asia, the study says, the situation for minority languages "is uncertain in many parts of China" due to pressure from authorities. Linguistic diversity, however, is thriving in the Pacific region — which includes Japan, the Philippines, Indonesia and Papua New Guinea — which accounts for more than 2,000 living languages, or a third of the world total.

Widespread bilingual or multilingual government policies on the Indian subcontinent have helped keep local languages alive there, and some tongues have even been resurrected through intensive revival campaigns — including Cornish in southern England and the Ainu language in Japan, the study said.

In Africa, roughly 550 of the 1,400 local languages are on the decline, with 250 of those under immediate threat.

By Virginia Fenton ©MMII The Associated Press. All Rights Reserved. This material may not be published, broadcast, rewritten, or redistributed