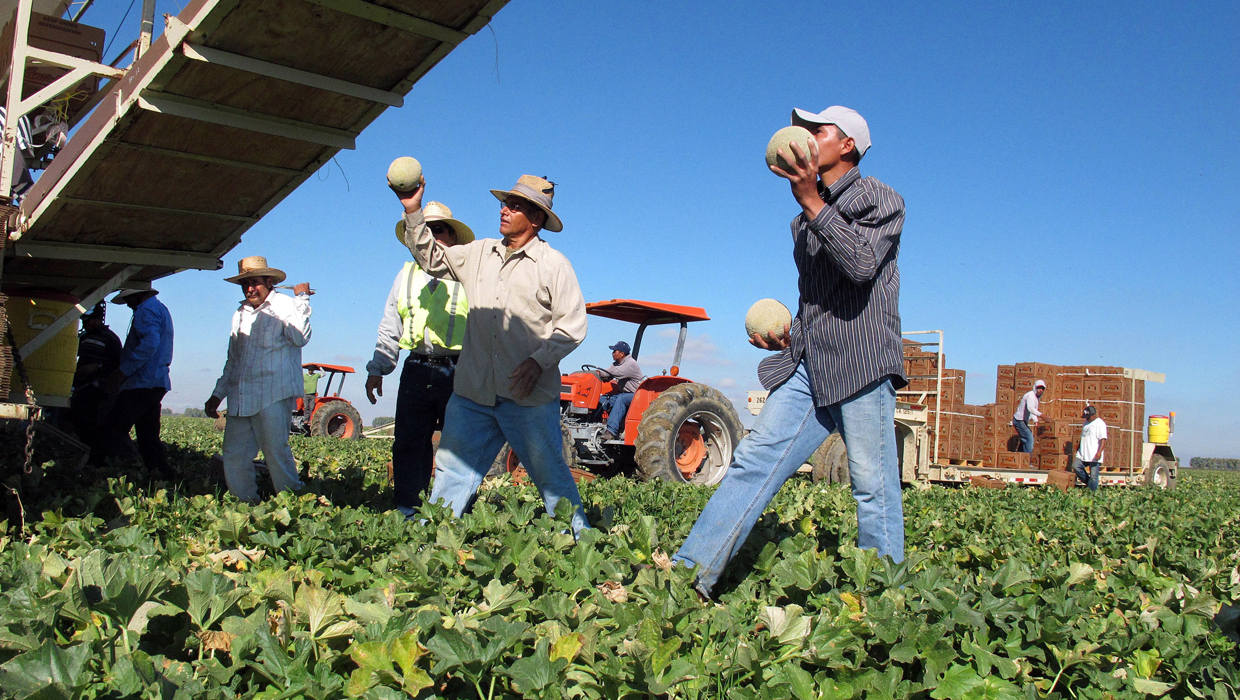 MADERA, California After Paulino Mejia crossed the border illegally into the U.S. in 1980, he picked grapes, peaches and other crops in California's agricultural heartland, lived in crowded rental housing, hid from immigration agents and sent paychecks to family members in his native Mexico.

His life, however, changed in 1986, when Congress agreed to allow immigrants who were in the country illegally to get legal status -- with a special provision that focused on farmworkers.

Mejia then stopped living in fear. He left agriculture to join a construction company that hired only legal workers, sent his two daughters to college and bought a house in Madera, near Fresno, instead of wiring money to Mexico.

"Immigration reform changed my life. It gave my family freedom," Mejia said. "It allowed us to reach the American dream."

With Congress considering a new immigration proposal that includes a speedier process to legal status for farmworkers in the U.S. illegally, experts say the best indicator of how such an overhaul would play out is to look at the fate of the generation of farmworkers legalized over two decades ago.

In Central California, the nation's agricultural powerhouse and a region with one of the highest poverty levels, the 1986 law had a profound impact on people like Mejia.

And like him, many other farmworkers who gained legal status after 1986 have left the fields, moving to jobs in packing houses, warehouses and factories, attending college and working as professionals. And many who remained in agriculture became supervisors, crew leaders or labor contractors.

As their wages soared, they bought cars, houses and trailer homes - and many airplane tickets to visit family south of the border.

Workers, advocates and experts say immigration reform could again lift many farmworkers, one of the poorest groups of immigrants, out of poverty. But this time, they say, legalization's impact would be much bigger: in 1986, many farmworkers were single men; today most have families.

Unlike in 1986, growers and worker advocates say the current reform proposal would also ensure that a poor, illegal class of farmworkers isn't created again - by including a viable guest worker program that would allow for a flow of legal temporary workers into California's fields.

"Nobody knows the future, but if the past is any guide, the farmworkers who get legalized, many of them will leave agriculture pretty quickly," said Philip Martin, professor of agricultural and resource economics at the University of California, Davis.

More than 1 million farmworkers applied for legalization under the Immigration Reform and Control Act of 1986.

After the corresponding drop in the number of farmworkers in the country illegally, federal data show that farmers failed to retain their legalized workers and turned again to hiring employees from the groups of people entering the U.S. illegally.

Today, experts say, at least two thirds of the nation's farmworkers are in the country illegally and those legalized thanks to the 1986 changes make up just 12 to 15 percent of the agricultural workforce.

Experts say newly legalized farmworkers sought non-seasonal, year-round employment with a steady income and benefits such as health insurance or vacations, which are rare in agriculture.

Even those who remained in the fields due to lack of language skills, little education or other barriers still benefited, because they were able to claim unemployment insurance and other benefits when farm work dried up for the season.

Other farmworkers went to college.

Fausto Sanchez, of Arvin, California, left agriculture for a job as a certified interpreter of Mixteco, an indigenous Mexican language spoken by many farmworkers.

He then got his high school diploma in adult school and an associate's degree in human services. He now works for a nonprofit, educating farmworkers about pesticides, heat rules and workers' rights. He and his wife own a house and two cars - and he is planning to return to college to become a social worker.

"If I didn't get legalized, all this would not have been possible for me," Sanchez said.

California growers and labor contractors acknowledge many farmworkers would leave the fields if granted legal status.

"There's no question that once farmworkers get a green card, many will apply for other jobs and leave agriculture," said Tom Nassif, president of Western Growers, an industry group that represents California and Arizona growers. "We support the pathway to citizenship at our own peril, knowing we will lose the people who are most skilled and most productive employees within a short time."

A green card is issued to immigrants who obtain permanent resident status, a step toward eventual citizenship.

But the flight from agriculture may not happen as fast, Nassif said, because the current version of immigration reform requires farmworkers to remain in agriculture for at least five years to qualify for the speedier legalization process.

And once legalized, some farmworkers will choose to stay in the fields - as was the case with Julia Cervantes, Mejia's wife, who still occasionally picks grapes and other crops. "I like fresh air. I sincerely like working in the fields," she said.

For Mejia, it came down to wages: He and his wife could not make ends meet with what farmers paid in the fields. "Our family started growing, and we didn't have enough to survive," Mejia said.

Legalization allowed Mejia to get a job erecting the metal frames of big box stores. His brother became a roofer. Other friends became plumbers and electricians, or field supervisors. "The work is easier and the money is better," Mejia said of his new profession.

Prior to the 1986 Amnesty, Mejia wanted to return to Mexico and wired money to build a house in Oaxaca, in southwestern Mexico. But after reform, Mejia's new construction job and his newly acquired social security number allowed his family to buy a home in California. Paying a mortgage and taxes cemented their decision to remain in the U.S.

"Before reform, we were afraid to buy anything or to settle here, because if they deported us, we would lose everything," he said. "Reform helped us to invest here."