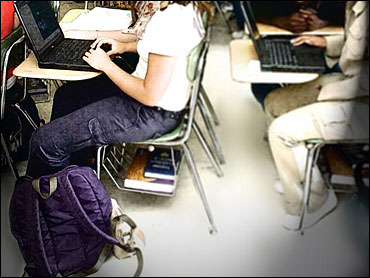 Nearing a diploma, most college students cannot handle many complex but common tasks, from understanding credit card offers to comparing the cost per ounce of food.

Those are the sobering findings of a study of literacy on college campuses, the first to focus on the skills of students as they approach the start of their careers.

More than 50 percent of students at four-year schools and more than 75 percent at two-year colleges lacked the skills to perform complex literacy tasks.

That means they could not interpret a table about exercise and blood pressure, understand the arguments of newspaper editorials, compare credit card offers with different interest rates and annual fees or summarize results of a survey about parental involvement in school.

The results cut across three types of literacy: analyzing news stories and other prose, understanding documents and having math skills needed for checkbooks or restaurant tips.

"It is kind of disturbing that a lot of folks are graduating with a degree and they're not going to be able to do those things," said Stephane Baldi, the study's director at the , a behavioral and social science research organization.

Most students at community colleges and four-year schools showed intermediate skills, meaning they could perform moderately challenging tasks. Examples include identifying a location on a map, calculating the cost of ordering office supplies or consulting a reference guide to figure out which foods contain a particular vitamin.

Overall, the average literacy of college students is significantly higher than that of adults across the nation. Study leaders said that was encouraging but not surprising, given that the spectrum of adults includes those with much less education.

Compared with all adults with similar levels of education, college students had superior skills in searching and using information from texts and documents.

"But do they do well enough for a highly educated population? For a knowledge-based economy? The answer is no," said Joni Finney, vice president of the National Center for Public Policy and Higher Education, an independent and nonpartisan group.

"This sends a message that we should be monitoring this as a nation, and we don't do it," Finney said. "States have no idea about the knowledge and skills of their college graduates."

The survey examined college and university students nearing the end of their degree programs. The students did the worst on matters involving math, according to the study.

Baldi and Finney said the survey should be used as a tool. They hope state leaders, educators and university trustees will examine the rigor of courses required of all students.

The survey showed a strong relationship between analytic coursework and literacy. Students in two-year and four-year schools scored higher when they took classes that challenged them to apply theories to practical problems or weigh competing arguments.

The college survey used the same test as the National Assessment of Adult Literacy, the government's examination of English literacy among adults. The results of that study were released in December, showing about one in 20 adults is not literate in English.

On campus, the tests were given in 2003 to a representative sample of 1,827 students at public and private schools. The Pew Charitable Trusts funded the survey.

It has a margin of sampling error of plus or minus 3 percentage points.