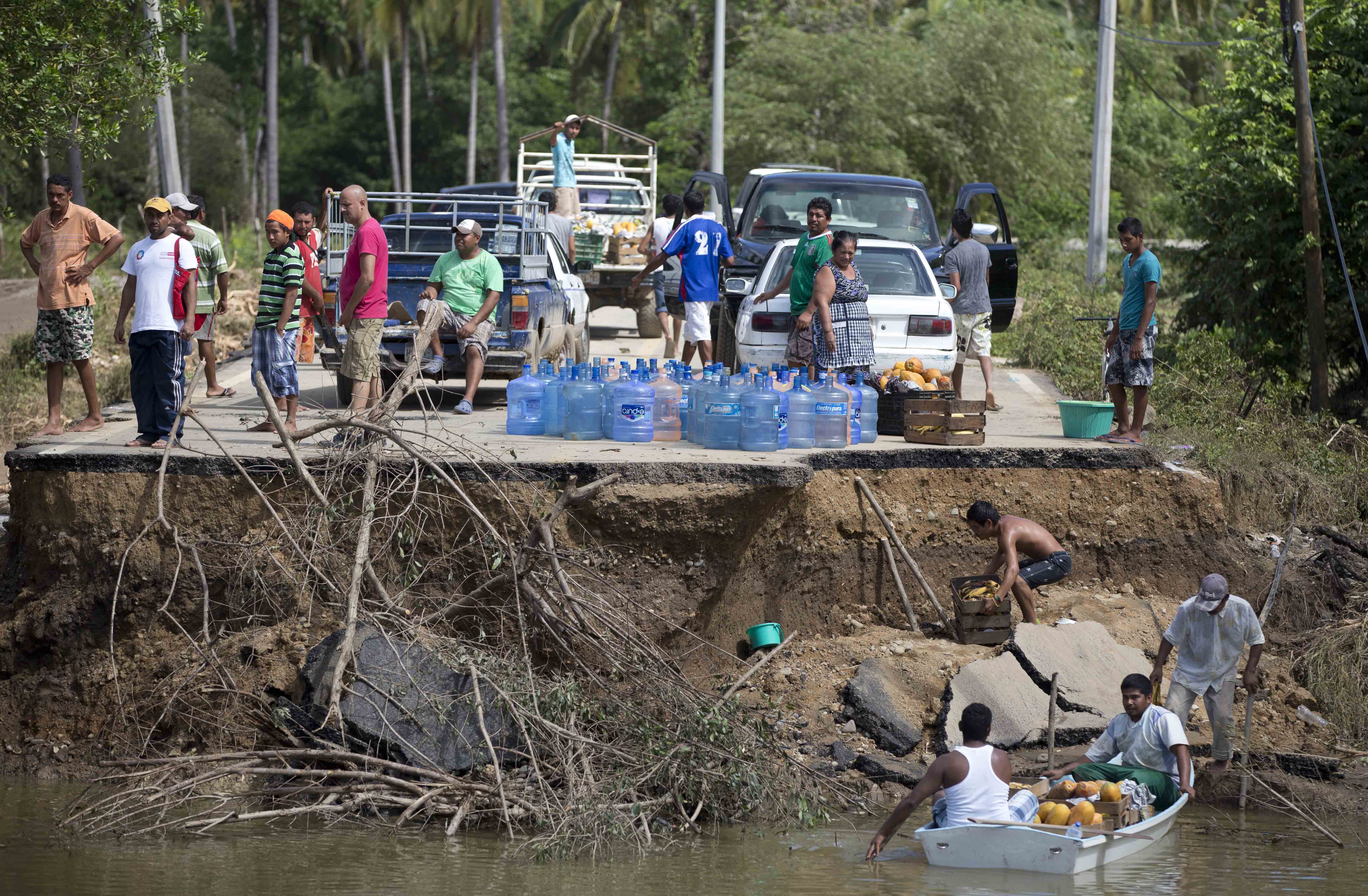 ACAPULCO, Mexico The toll from devastating twin storms climbed to 80 on Wednesday as isolated areas reported deaths and damage to the outside world. Mexican officials said another 58 people were missing in a massive landslide in the mountains north of Acapulco.

The storm that devastated the Pacific resort over the weekend regained strength Wednesday and became Hurricane Manuel, taking a route that could see it make landfall on Mexico's northwestern coast overnight. It would be a third blow to a country still reeling from the one-two punch of Manuel's first landfall and Hurricane Ingrid on Mexico's eastern coast.

Outside Acapulco, federal authorities reached the mountain village of La Pintada by helicopter and evacuated dozens of people, many of whom were are hurt, one seriously, said Interior Minister Miguel Angel Osorio Chong,

Osorio Chong said at least 58 people are missing in the coffee-growing village where many homes were buried by a landslide, adding that there is a risk of more landslides. Officials have not yet seen any bodies, he said, despite reports from people in the area that at least 15 people had been killed.

"It doesn't look good, based on the photos we have in our possession," Osorio Chong said, calling it "a very powerful landslide; very big ... You can see that it hit a lot of houses."

Atoyac, a largely rural township about 42 miles (70 kilometers) west of Acapulco, is accessible only by a highway broken multiple times by landslides and flooding.

Ricardo de la Cruz, a spokesman for the federal Department of Civil Protection, said the death toll had risen to 80 from 60 earlier in the day, although he did not provide details of the reports that drove it up.

In Acapulco, three days of Biblical rain and leaden skies evaporated into broiling late-summer sunshine that roasted thousands of furious tourists trying vainly to escape the city, and hundreds of thousands of residents returning to homes devastated by reeking tides of brown floodwater.

The depth of the destruction wreaked by Manuel, which first hit Mexico Sunday as a tropical storm, was highlighted when the transportation secretary said it would be Friday at the earliest before authorities cleared the parallel highways that connect this bayside resort to Mexico City and the rest of the world.

Hundreds of residents of Acapulco's poor outlying areas slogged through waist-high water to pound on the closed shutters of a looted Costco, desperate for food, drinking water and other basics.

Many paused and fished in the murky waters for anything of value piling waterlogged clothing and empty aluminum cans into plastic bags.

"If we can't work, we have to come and get something to eat," said 60-year-old fisherman Anastasio Barrera, as he stood with his wife outside the store.

Forecasters said the deadly storm had top sustained winds of 75 mph (115 kph) and was centered about 20 miles (30 kilometers) southeast of the western Mexican community of Altata.

The center also says Manuel is moving north at 5 mph (7 kph) and a hurricane warning is in effect from La Cruz to Topolobampo in the Mexican state of Sinaloa.

With a tropical disturbance over the Yucatan Peninsula headed toward Mexico's Gulf coast, the country could face another double hit as it struggles to restore services and evacuate those stranded by flooding from Manuel and Ingrid, which hit the Gulf coast.

Elsewhere in the verdant coastal countryside of the southern state of Guerrero, residents turned motorboats into improvised ferries, shuttling passengers, boxes of fruit and jugs of water across rivers that surged and ripped bridges from their foundations over the weekend.

In Acapulco's upscale Diamond Zone, the military commandeered a commercial center for tourists trying to get onto one of the military or commercial flights that remained the only way out of the city. Thousands lined up outside the mall's locked gates, begging for a seat on a military seat or demanding that airline Aeromexico honor a previously purchased ticket.

"We don't even have money left to buy water," said Tayde Sanchez Morales, a retired electric company worker from the city of Puebla. "The hotel threw us out and we're going to stay here and sleep here until they throw us out of here."

A lucky few held up ransacked beach umbrellas against the sun. Temperatures were in the mid-80s but felt far hotter. Dozens of others collapsed in some of the few spots of shade..

"Forty-eight hours without electricity, no running water and now we can't get home," said Catalina Clave, 46, who works at the Mexico City stock exchange.

Mexico's federal transportation secretary said that at least 8,000 people had been flown out of the city on 49 flights by Wednesday afternoon, a fraction of the 40,000 to 60,000 tourists estimated to be stranded in the city.

In the low-lying neighborhood of Colosio, residents drove through knee-high brown water to reach homes whose bottom floors were glazed in brown sediment.

"We're devastated," said Jorge Luis Pacheco Meijia, a 26-year-old English professor, pausing as he piled sodden, soiled furniture and appliances outside his house. "All the time you spend working from dusk `til dawn, everything's lost."