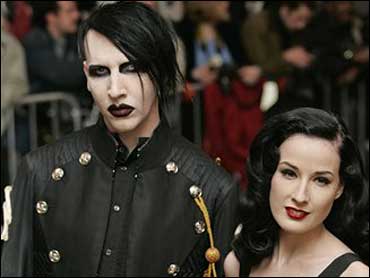 Marilyn Manson says he was devastated over the breakup of his marriage to model and burlesque dancer Dita Von Teese.

"I was completely destroyed. I had no soul left," the 38-year-old glitzy goth rocker says in Spin magazine's June issue, on newsstands May 29. "I define myself as a person, a human, an artist, as someone who makes things — writing, painting, music — and I couldn't do anything."

"She said she had tolerated the lifestyle because she hoped I would change and threatened to leave if I didn't," Manson says.

"I was sleeping on the couch in my own home. I was no longer supposed to be a rock star. I was someone who had to be apologized for. I wasn't prepared to be alone. I came out of this naked, a featherless bird."

2His outlook changed when his friendship with 19-year-old actress Evan Rachel Wood turned romantic. He tells the magazine he was impressed when she said she would die for him.

"It might sound strange, but this made me want to live," he says.

Wood, whose screen credits include "Thirteen" and "Running With Scissors," was quoted in the story as saying, "Boys in eye makeup are the greatest thing ever — that whole androgynous thing."

Sources told People magazine in January that Manson's relationship with Wood played a part in his split from his wife.

Manson's new album, "Eat Me, Drink Me," is slated for release June 5.