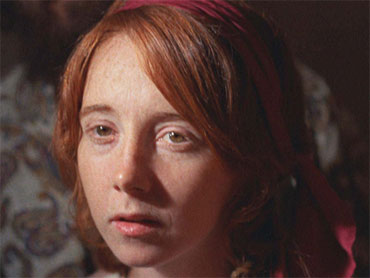 The Charles Manson follower convicted of trying to assassinate President Gerald Ford was released Friday from a Texas prison hospital after more than three decades behind bars.

Lynette "Squeaky" Fromme, 60, left the Federal Medical Center Carswell in Fort Worth at about 8 a.m. EDT Friday, spokeswoman Dr. Maria Douglas said. Though a few photographers had camped out since the night before outside the facility surrounded razor wire-topped fences, Fromme slipped by the group unnoticed in one of the many cars streaming in and out of the front gate Friday morning.

It was a far cry from her antics that captivated the United States' attention 30 years ago: shaving her red hair and carving an "X" into her forehead after Manson was convicted for orchestrating a mass murder, wearing a red robe when she pulled a gun on Ford, being carried into her trial courtroom by marshals when she refused to walk.

In September 1975, Fromme pushed through a crowd, drew a semiautomatic .45-calibre pistol from a thigh holster and pointed it at Ford, who was shaking hands with well-wishers while walking to the California state capitol in Sacramento. But Secret Service agents grabbed her and the gun, and Ford was unhurt.

Fromme, who reportedly got her nickname while in Manson's "family," possibly because of her voice, had become its leader. She was never implicated in the 1969 murders of actress Sharon Tate and eight others, for which Manson is serving a life term in Corcoran State Prison in California.

During her trial, Fromme either refused to attend or had outbursts. Her attorney argued that she wanted to call attention to environmental issues and Manson's case and never meant to kill Ford. A few bullets were in the gun but not in the chamber.

Fromme was convicted and got a life term, becoming the first person sentenced under a special federal law covering assaults on U.S. presidents, a statute enacted after President John F. Kennedy's 1963 assassination.

She later was sentenced to 15 years in prison, which was tacked onto her life term for threats against the president, after escaping from a women's prison in Alderson, West Virginia, in 1987. She was recaptured two days later about two miles away after a massive search. Fromme had said she escaped from prison to be closer to Manson after hearing rumours that he was dying.

Fromme was granted parole in July 2008 for "good conduct time" but was not released until Friday because of the additional time for the prison escape, prison officials said.

She will be on parole supervision. A U.S. Parole Commission spokesman did not immediately return calls seeking comment about the terms.

Fromme had been at the Fort Worth prison since 1998. The facility specializes in providing medical and mental health services to female offenders and also has a maximum-security unit, a minimum-security camp and an area for low-security inmates, Douglas said, declining to say where Fromme had been housed.

Prison officials previously said she was placed in the maximum-security unit for inmates who have escaped or been involved in assaults.

She had spent her sentence at several prisons. Fromme started out at the West Virginia prison, then was transferred to the prison at Pleasanton, California, in 1978 after prison officials said she had become a "model inmate." But she was sent back to West Virginia in 1979 as punishment for striking another inmate with a hammer while the two tended a garden on the prison grounds. She later was moved to Kentucky and then to Florida.

Fromme declined a recent interview request from The Associated Press.

In 2005, Fromme responded to the Fort Worth Star-Telegram's interview request with a 35-line letter in elegant cursive handwriting, the newspaper reported. At the time she had not sought release, although she became eligible for parole in 1985.

"I stood up and waved a gun (at Ford) for a reason," she wrote. "I was so relieved not to have to shoot it, but, in truth, I came to get life. Not just my life but clean air, healthy water and respect for creatures and creation."