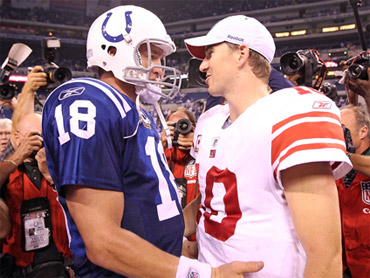 He shook hands with Eli before the game. He spent 10 minutes chatting with him in a hallway after the game, taking time to explain he still loved him. In between, Peyton and his teammates beat Eli up — as older siblings tend to do.

The four-time league MVP threw for 255 yards and three TDs, the defense pummeled Eli and Indianapolis rolled to a 38-14 victory over the Giants in Manning Bowl II.

"I just told him good game, I told him that I loved him, that they'd be fine and we'd do our best to help him out when we play all those NFC East teams," Peyton said graciously.

That's all Eli could ask for following this debacle.

The game was billed as a more even duel between the Super Bowl-winning quarterbacks than their first contest four years ago. Peyton won that one 26-21.

But this game, unlike Manning Bowl I, was never close.

It was so ugly, Peyton didn't even bother to watch.

"I really just kind of focused on the (Giants) defense and on our running game," he said.

According to CBSSports.com's Pete Prisco, running was a must for the Colts. They were last in the NFL in rushing last season and still went to the Super Bowl.

For Indy, it was a remarkable and desperately needed turnaround from last week's season-opener, when Peyton was the one getting pounded in Houston. The Texans twisted and turned Manning every which way, putting him on the ground 13 times.

On Sunday, the Colts (1-1) reverted to their old form.

The drops that plagued Indy last week virtually disappeared Sunday. Receivers ran up the field instead of looping around to gain extra yardage. The running backs churned out 160 yards and one TD, and Joseph Addai's 92 yards was his highest total since November 2008.

And nobody could quibble with the play of Indy's offensive line or defense, both of which were heavily criticized all week. The combination allowed Indy to avoid its first 0-2 start since 1998, when Manning was a rookie and Eli was in high school.

"I'm not certain they had anything to prove other than the fact that we didn't play well last week," coach Jim Caldwell said. "I thought the guys really focused in like they do every week in terms of preparation. Our practices were good, and they played like it."

Eli, on the other hand, never got in sync.

The Giants (1-1) managed only two first downs in the first quarter and only five in the first half when they spotted the Colts a 24-point lead. And when it looked like the Giants had finally gotten some momentum — after Eli's 54-yard TD pass to Mario Manningham and a defensive stop — Dwight Freeney stripped that chance away, too, by knocking the ball out of Eli's hands near the Giants' own goal line.

Fili Moala recovered the rolling ball in the end zone to give Indy a 31-7 lead with 6:27 left in the third quarter.

"It's a team that we don't play all that often," Eli explained. "You're not used to some of the things they do, and that speed, and that offense... We just didn't perform well."

In a fitting twist to a frustrating night, Brandon Jacobs couldn't even throw his helmet straight.

Instead of tossing it into the ground, as it appeared Jacobs wanted to do, the helmet slipped out of his hands and landed about five rows up in the stands. Stadium security guards went into the stands to retrieve it.

It wasn't any easier for the brothers or their father, Archie. The patriarch of football's first family squirmed all night at Lucas Oil Stadium.

When asked about how he copes on nights like this, Archie smiled, shrugged his shoulders and said: "I don't know. It's tough."

But it was far tougher for Eli than anyone else.

Peyton burned the Giants again early in the second quarter, hooking up with Dallas Clark for a 50-yard TD catch, the 43rd TD connection between them, tying Sonny Jurgensen and Jerry Smith for No. 2 on the NFL's career list for quarterbacks and tight ends. Only Drew Bledsoe and Ben Coates (45) have more.

"That safety flew by me as fast as he could trying to suck up on that run and left the middle of the field open," Clark said. "It's something we've been working on all week, too, trying to sell their fakes and it was just great execution."

The interception led to a Colts' field goal, and after Eli lost his first fumble, Peyton found Austin Collie for a 3-yard TD pass with 9 seconds left in the half to make it 24-0.

But at least Peyton did sent his brother back to New York with some encouraging words and a blueprint for how to get things fixed.

"They got beat pretty good last week by the Texans, they came out this week, and they had a real fire under them and played really well and obviously, improved," Eli said.