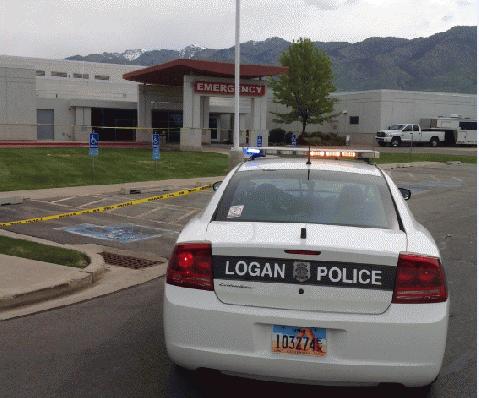 NORTH LOGAN, Utah - Police shot and injured a man wielding a gun inside a hospital emergency room in the northern Utah city of North Logan on Friday morning, officials said.

Gary Jensen, the chief of police in the nearby city of Logan, said there are no other injuries and the suspect was in custody after he was shot four times at Cache Valley Hospital, located about 85 miles north of Salt Lake City.

Jensen said the man was still alive in critical but stable condition and emergency crews were preparing to fly him to a hospital in the Salt Lake City area.

The man was shot by two probation officers who happened to be at the hospital with a parolee.

Utah Department of Corrections spokeswoman Brooke Adams said the two probation agents responded when they heard reports of a man with a gun in the hospital and shots were fired.

She said the officers are on standard administrative leave as the Cache County Attorney's Office investigates the incident.

Adams did not provide further details.

Jensen said police are still trying to piece together what happened. He said he did not have any details about the man's identity, why the man pulled out a firearm or what he was doing at the hospital.

He said it was unclear how many people were in the emergency room at that time.

Jensen, who was handling media calls on the incident for the North Park Police Department, said officials planned to release further details at a press conference Friday afternoon.

The Cache Valley Hospital says in a statement on its Facebook page that the facility was on lockdown after the incident around 8:30 a.m. Friday.

They say despite the lockdown, the incident is under control and physician offices are open.

Jensen said that the rest of the hospital was open Friday morning but patients were being asked to go to a nearby hospital about a mile away in the city of Logan for any emergency care.

A nearby elementary school was on lockdown for a while but that was lifted later Friday morning, Jensen said.

The city of North Logan has a population of about 8,700.