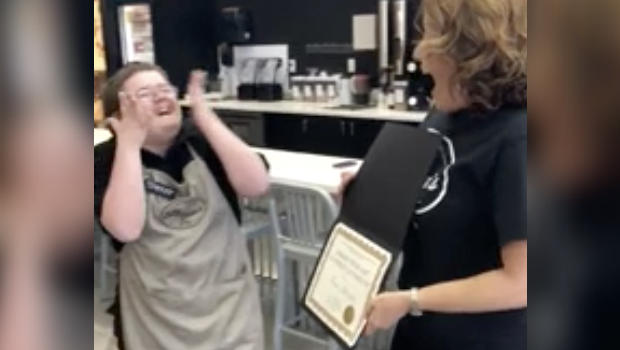 Trevor Jefferson is a barista, a "dance machine," and he has Down syndrome. Trevor, 23, works at Bitty & Beau's Coffee in Wilmington, North Carolina, a coffee shop that brews up opportunity for people with disabilities.

Bitty & Beau's Coffee prides itself on hiring great people with intellectual and developmental disabilities. Trevor's boss Amy Wright, the co-founder of Bitty & Beau's, wanted to recognize his talent -- dancing. So Wright gathered her employees around Trevor on Monday for a surprise. Bitty & Beau's Coffee shared video of the surprise announcement on its Facebook.

"You love to dance. And you entertain. And so I thought it was time to give you a promotion," Wright tells Trevor in the video. "We are making you, officially, our director of entertainment."

His fellow employees cheer as Trevor accepts a certificate with his new title on it: "Director of Entertainment." The sweet surprise did not stop there. "And with this comes a raise, too, Trevor," Wright says.

Trevor's beaming face said it all. He was ecstatic about the promotion. And he told CBS News his colleagues were just as excited for him.

Wright says that's one of the nice things about the shop. "It's a very supportive environment, unlike other work environments, where people would have some jealousy and resentment," she told CBS News.

Wright and her husband were inspired to create the coffee shop by their two youngest children, named Bitty and Beau. "Beau is 13 and Bitty is 8, both have Down syndrome, and it became very clear to us as we've been parenting them that the opportunities just aren't there for them," Wright said.

"We weren't looking for a job for them when we started this shop, but we were looking to change the culture so that when they were old enough, the world would be ready for them," she said.

The business opened in Wilmington in 2016 and has since expanded. Bitty & Beau's currently employs about 60 people with disabilities at their shops in Wilmington and Charleston, South Carolina, with a third location opening in Savannah in September. Wright says they are scouting locations across the country and are hoping to open coffee shops coast to coast.

Wright says Bitty & Beau's employs people with various conditions such as autism, cerebral palsy, and traumatic brain injuries, and some that have yet to be diagnosed. Before being hired, every candidate comes in for an interview, but no previous work experience is required. "We identify what they're good at and we find a job in the shop," Wright says.

Trevor is good at talking to people and is very social, so the barista job was perfect for him. He enjoys taking people's orders and dancing with them while they wait for their coffee. "Some are good at measuring and counting so they're good at making drinks, and some are non-verbal" and require other jobs, Wright says.

As for the promotion, Wright said Trevor earned it because "he just has a gift for entertaining people and he does a great job. He welcomes [customers] and he loves to dance," she told CBS News.

"That's a big part of Bitty & Beau's coffee. We always have dance parties here," Wright says. "He's always setting an example for his coworkers, so it was an easy decision to give him the promotion."

Wright says several other employees have been given promotions based on their skills, from director of guest experiences to director of smooth operations.

Trevor already has a plan for his new salary. "I want to buy a car and house," he told CBS News. He also has other ambitions. Trevor is a Special Olympian and takes cheerleading and dance lessons. He is going to the Special Olympics this summer to compete in the cheerleading competition.

Wright told CBS News seeing people like Trevor "blossom in their role, gain a sense of self worth and a sense of confidence, and then leave go out into the world," is what Bitty & Beau's is all about.

"Lots of families with young children with disabilities come here and they see the light at the end of the tunnel," Wright said of the countless people Bitty & Beau's has inspired. "Other people that come, Trevor's mom included, have told us what these jobs have done for [their] life."

"The whole atmosphere here is great. Everybody is friends with everybody and it's a real place of community," she says. Plus, "everybody dances with you."