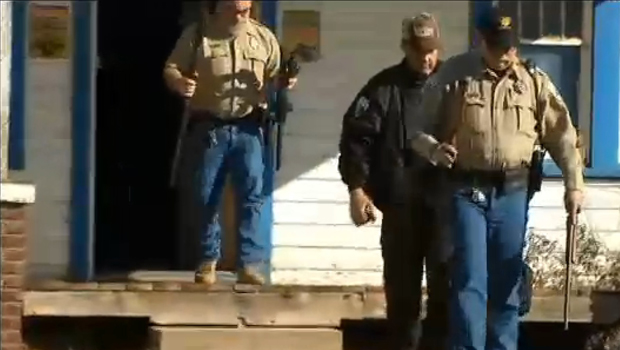 "(Ross) borrowed a (bulletproof) vest from the county before he went in, and it saved his life," said Dlugonski. "It was a blessing that he borrowed that vest."

Authorities said Horton claimed he didn't know it was an officer inside the home.

"Don't know what he heard or didn't hear, screaming from five officers of the law announcing our presence, requesting to see hands," Ross told KWTV.

The police chief is black, and the suspect is white.

After the shooting, investigators from the Oklahoma State Bureau of Investigation searched Horton's home and found several guns and a possible explosive device. According to KWTV, the house has signs by the front door that say "Certified Zombie Killer" and "Warning: Zombies inside -- Enter at your own risk."

The OSBI released Horton Thursday afternoon, saying there was not enough evidence to arrest him for the shooting. Investigators said an OSBI computer analyst determined the 911 calls did not come from Horton's home.

As of Friday, Ross had not been interviewed by OSBI. He said the investigation is ongoing and didn't want to comment on Horton's release but that he has faith in the system.