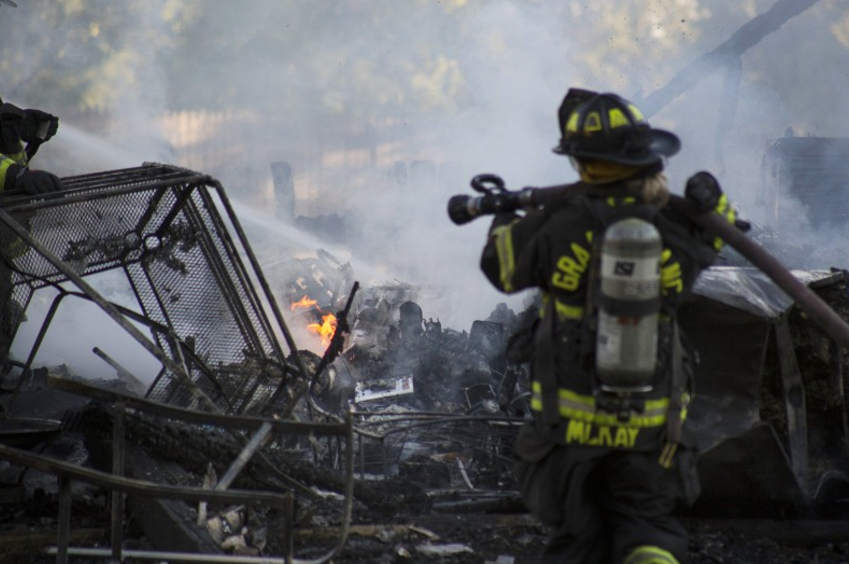 When it comes to removing a wasp nest from your garage or home, Grand Blanc Fire Chief Robert Burdette would like to offer a word of advice: "Call a professional."

That's what one Michigan man wishes he would have done after accidentally setting his garage on fire and burning it to the ground Monday night while attempting to kill dozens of wasps buzzing in the corner.

Mike Tingley, of Grand Blanc Township, was using a smoke bomb to try to kill the swarm of insects when a wood frame caught on fire.

"Of course, it's the garage -- there's gasolines, petroleum and fire products in there," Burdette told CBS News. "It went up fast."

And as soon as fire officials arrived on the scene around 7 p.m., fireworks started to explode.

"He had some fireworks stored outside of the garage in the overhanging area to protect them from the weather," Burdette explained. "It was right next to the garage and as the fire spread to the fireworks they ignited."

Burdette and his firefighters, with assistance from Burton and Mundy Township, were able to contain the blaze within 30 minutes.

The garage was reduced to rubble, but Tingley's house only sustained minor damage. Luckily, no one was hurt -- except maybe the wasps, Burdgette said.

The Grand Blanc Fire Department didn't receive an unusually high number of calls over the Fourth of July weekend, but they have been responding to more fireworks-related incidents lately.

Burdgette said he'd like to advise those who have set off fireworks to dispose of them in a metal container about 15 to 20 feet away from combustibles.

"Do not take fireworks that have been used and put them into a cardboard box or plastic bag and put them inside your house," he warned. "Leave everything out for 24 hours to make sure it's completely out. We've had at least two fires because of this. The first -- they lost the entire house."