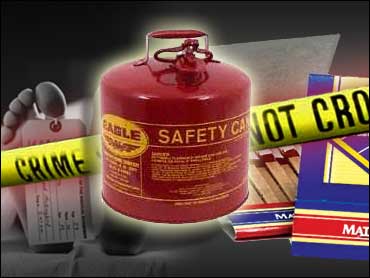 A man doused his girlfriend and three small children with gasoline inside a car and set them on fire as he drove, authorities said. All five died after the car crashed in flames.

Residents reported hearing the crash early Wednesday and seeing two adults engulfed in flames, stumbling across a road near Bonny Lake, a small town east of Tacoma. Firefighters found the bodies of a 6-month-old boy, 1 1/2-year-old boy and 2 1/2-year-old girl in the back of the burned car.

Antigone Monique Allen, 18, who had recently filed an assault complaint against the 24-year-old man, survived for nearly eight hours at a Seattle hospital, sheriff's Detective Ed Troyer said. She managed to tell investigators and family what happened before she died.

Laveda Allen said her sister had gone out the previous evening with her estranged boyfriend, identified as Genario Garcia.

Garcia snorted cocaine while they were out Tuesday night and the two began arguing, Laveda Allen said. Antigone — "Mona" to her family and friends — demanded that he take her home.

They stopped at a gas station, and, because she had been dozing, she didn't notice right away that he had filled a container with gasoline and placed it in the back seat, Laveda Allen said.

They drove along back roads before Garcia pulled a gun and pointed it at Antigone Allen's head. He grabbed the container and splashed gasoline on the children, Antigone and himself, Laveda Allen said.

He flicked a lighter and the car erupted, left the road and flipped over.

The two adults stumbled from the wreck, and Garcia, who had two guns with him, began shooting. Neighbors said he fired four or five shots. Troyer said an autopsy would be needed to determine whether any of the bullets hit Antigone Allen.

Lisa Hansen, who lives nearby, said she heard the crash and drove down the road to see if she could help. She and a friend of her sons heard a voice in the pasture screaming: "Help! Help! Help me, please!"

They saw the woman standing, with her shirt burned off, but Hansen could not get to her because an electrified horse fence was between them. According to Hansen, the woman was screaming in pain, saying, "He did it! He did this on purpose!"

Laveda Allen said doctors told her sister had burns over 85 percent of her body.

"She said she wanted to be with her babies. She wasn't angry. She knew she was going to die, and she was willing to go, but she wanted to say bye," she said.

Troyer said Allen had recently filed an assault complaint, and a deputy was assigned to the case, but the woman failed to follow through.

"They were in the process of getting back together or breaking up, off and on," the detective said. The woman's relatives indicated there had been "some unreported domestic violence," Troyer said.

Laveda Allen said she wasn't upset with Garcia, who she said was the father of his sister's three children.

"He was a good person," she said. "He was an illegal immigrant here, but he was a hard worker and tried to do what he had to do to make it.

"He just went over the deep end. He probably just loved her too much. He didn't want to see his kids being taken care of by another man."

The family is planning to bury her and the three children on Saturday, which would have been Antigone Allen's 19th birthday.