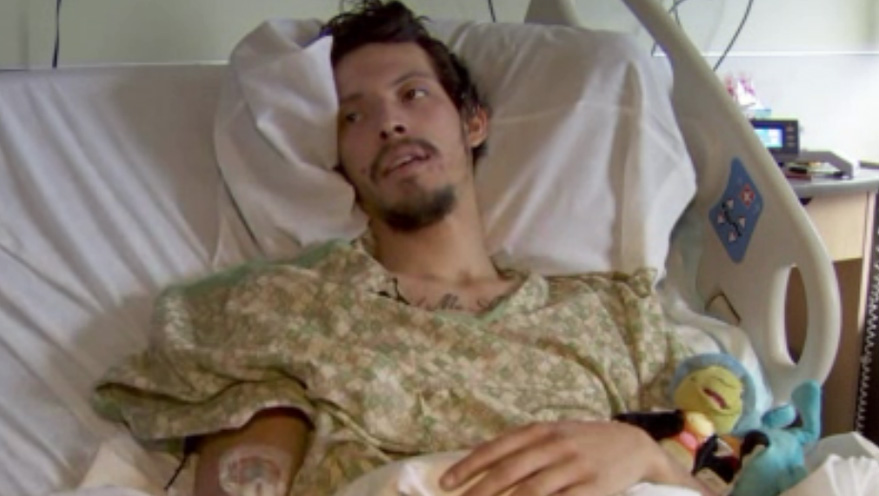 A Washington state man who survived a freak journey through an industrial machine similar to a wood chipper was recovering in a hospital on Thursday from crushed bones and battered organs, and said he felt fortunate to be alive.

Frank Arce, 23, was at his job as a general laborer at the Swanson Bark and Wood Products Co in Longview, Wash. late last week when he climbed up on a drum to remove a piece of jammed wood, Arce and his mother, Brenda Arce, told Reuters.

He fell through a basketball-sized hole into a powered-off "porcupine" device, which uses eight-inch blades and other instruments to break up pieces of bark, Brenda Arce said.

A co-worker, who was unaware someone had fallen into the machine, switched the porcupine back on while Arce was trapped inside. He was in the machine for only seconds before a device operator heard screams and shut it down, but the lower half of his body was already mangled, Frank Arce said.

The machine is similar to a wood chipper, which is used to reduce tree limbs or trunks to woodchips, but is different because it uses blades geared toward separating, instead of chopping, piles of tree bark.

"There's no way I should be here right now," Frank Arce said in a phone interview from his hospital bed at the PeaceHealth Southwest Medical Center in Vancouver, Wash.

Four co-workers aided him until an ambulance arrived. "They kept him calm, joking around with him, making light of the situation so he would stay calm," Brenda Arce said.

Frank Arce said not knowing the extent of his injuries was more frightening than being chopped at by blades and other heavy metal parts.

"After I went though the machine and everything got shut down, I was sitting there, waiting, and I didn't want to look at the wounds," he said. "I didn't know if I was going to make it or if I was going to pass on that day."

Frank Arce, who has a tattoo spanning the length of his chest that reads, "Send me an angel," said he felt "guardian angels" were sent to protect him on the day of his accident and that he considers his survival a miracle.

He suffered seven broken ribs, a broken pelvis, a broken knee, a shattered ankle, a collapsed lung, a bruised liver and permanent nerve damage from the incident, Brenda Arce said. She said it was unclear if her son would be able to walk and move normally again.

"We're not exactly sure the extent of what he'll be able to do. He might not be at a 100 percent but he's alive and that's all that we care about," she said.

The Washington state Department of Labor and Industries is investigating the incident, bureau spokeswoman Elaine Fischer said. The company does not have a record of safety violations, she added.

A manager at the company did not return a call seeking comment.