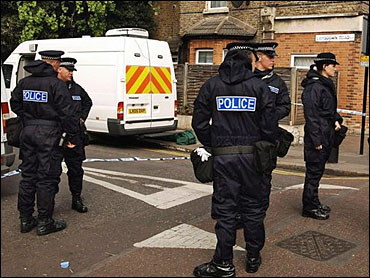 Police shot a man during an anti-terrorist raid in east London on Friday morning. One man was arrested, the Metropolitan Police said.

The injured man was taken to a nearby hospital with non life-threatening injuries. Another man, aged 23, was arrested during the operation.

Witnesses at the scene said police quietly swooped into the racially mixed neighborhood in the pre-dawn raid. They described seeing a man wearing a bloodstained T-shirt being carried out of the house following the raid.

Two other people in the house at the time of the raid were treated at the hospital, possibly suffering from shock, a police spokeswoman said, on condition of anonymity in line with departmental policy. Both were released.

Neighbors said a man, a woman and their four teenage children lived in the raided house. Some said the family had lived there for years.

"My parents heard the commotion and said there were police outside so I went around to the window and there were loads of police and loads of vans," said Dimple Hirani, 21. "I saw loads of police in special uniforms coming out of the van. They had special gloves and special equipment."

Police said officers executed a search warrant under the authority of the Terrorism Act in a raid described as "intelligence-led."

He said when he arrived for work in the morning the streets were sealed off. Plain-clothes police and officers wearing protective suits were combing the area.

"It's shocking. you don't expect this kind of thing on your doorstep," said Hirani.

The raid came after discussions between the Security Service, the anti-terrorist branch and biochemical experts from the Health Protection Agency, police said.