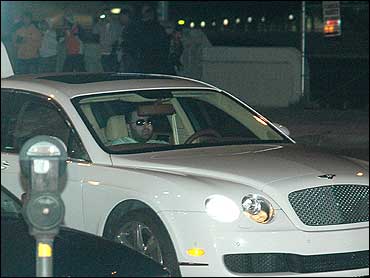 An assault suspect led Los Angeles police on a chase in a luxury sedan for more than three hours before shooting himself in the head as he sat in the car surrounded by armed officers, police said. He died hours later.

The low-speed pursuit covered several Southern California freeways Monday night before the man came to a stop on a street near Universal Studios very close to where the chase began.

About 90 minutes later, television news video showed three large armored vehicles surround the car and SWAT team members approach it with guns drawn. They broke the white sedan's passenger window and opened the door, but the man had already shot himself.

Police said the man was suspected of assault with a deadly weapon on his girlfriend. They also suspected from the start of the chase that he was armed.

Driving less than 40 mph, the man behind the wheel of the $100,000-plus car began leading officers southbound on U.S. 101 through Hollywood, and kept heading south on different freeways nearly to the coast, then headed back north before stopping on Lankershim Boulevard near a well-lit Toyota dealership. An unidentified dark-haired woman approached the car and appeared to attempt to talk to someone in the Bentley.

As police waved her away, the trunk popped open, and police cars quickly lined up behind it; officers then trained their weapons on the car from behind the open doors of more than a dozen squad cars.

News helicopters hovered over the scene, and authorities kept back a crowd of photographers and gawkers.

Police Chase Comes To An End: