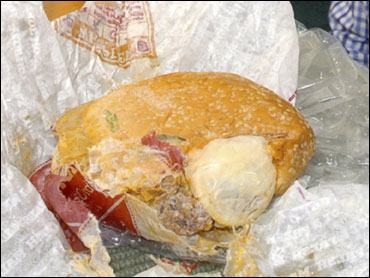 A former Vermont man who claimed he bit into a Burger King sandwich and found an unwrapped condom has settled his lawsuit out of court, his lawyer said Friday.

The attorney, Devin McLaughlin, said Friday that the details of the settlement are confidential and won't be disclosed, but the owner-operator of the Rutland restaurant says forensic analysis of the object and surveillance video prove it didn't originate in the Burger King.

"That was, from our side, pretty conclusive," said Joseph Zirkman, vice president and general counsel for Carrols Restaurant Group Inc., of Syracuse, N.Y. "They agreed to drop their claim and we agreed to drop our counterclaim. The parties agreed to pay their own legal costs, so you can draw your own conclusions."

In 2007, Van Miguel Hartless sued the store's owners, who denied the claim and filed a countersuit.

At the time, Hartless was a student at Green Mountain College. He claimed he bit into a Southwestern Whopper and found a condom, which he said caused him "sustained pain and suffering, vomiting, nightmares, mental and emotional distress" and medical expenses.

He couldn't be reached for comment Friday. He has since moved to El Paso, Texas, and efforts to reach him by telephone were unsuccessful Friday. He did not respond to a request for comment sent to him on Facebook, and his lawyer wouldn't say where he lives or make him available for comment.

"The lawsuit has been resolved upon terms acceptable to each of the parties, and those terms are confidential," McLaughlin said.

The Rutland Herald, which first reported the settlement Friday, says Hartless and the company asked a court on Oct. 6 to dismiss the case.