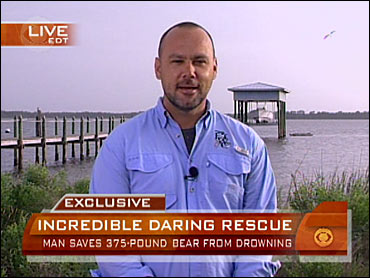 A Florida Fish and Wildlife Conservation Commission (FWC) biologist pulled off a daring rescue off the Panhandle -- that of a bear.

Officials say a 375-pound male black bear was seen roaming a residential neighborhood, evidently in search of food, near Alligator Point, some 40 miles south of Tallahassee.

The bear was hit with a tranquilizer dart, but he managed to bolt into the Gulf of Mexico before the drugs took effect.

At that point, FWC biologist Adam Warwick jumped in to keep the bear, who was some 25 yards offshore, from drowning.

He managed to get the bear to shore, and then a backhoe operator helped load the animal onto a truck. The bear was relocated to Osceola National Forest near Lake City, Fla.

On The Early Show Monday, Warwick told co-anchor Maggie Rodriguez he wasn't worried about the bear injuring him as much as a sting ray stinging him.

"I just wanted to try to get in front of him and keep him from swimming out there and drowning," Warwick says.

The bear, he continued, "started to swim, started to make the four-mile swim across the harbor. And so, I looked at (a colleague) and I said, 'I've got to go out there and stop him.' So, I took off my shirt and shoes, jumped in the water and swam in the direction to head him off and keep him from going into deeper water. Once I did that, I got in front of him, tried to create some splashing and some commotion and tried to get him to go back into shore. But he wasn't having any of that. The scariest part was probably when he decided -- he started looking at me as if he wanted to climb up on me to keep from drowning and, at one point, he reared up on his hind legs, so I'm looking at a six-and-a-half-foot tall bear. Instead of lunging forward, he fell straight back and was submerged for a couple of seconds and, that's kinda when I moved in."

According to FWC, "Warwick kept one arm underneath the bear and the other gripping the scruff of its neck to keep the bear's head above water. Warwick said he walked barefoot over concrete blocks crusted with barnacles in the 4-foot-deep water as he tried to guide and use the water to help float the bear back to shore.

He said he cut his feet on the barnacles and the bear scratched him once on the foot, but he was otherwise uninjured.

Warwick said the bear's buoyancy made his job less difficult.

"It's a lot easier to drag a bear in 4-foot water than move him on dry land," he said.