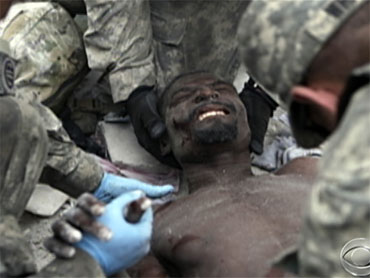 (CBS)
U.S. troops rescued a man who'd been trapped in a collapsed building in Port-au-Prince Tuesday.

The Associated Press reported a crowd of looters pulled Rico Dibrivell, 35, from the rubble of a store that had been repeatedly scavenged, and called for help from U.S. soldiers from the 82nd Airborne, who treated him for a broken leg and severe dehydration. Dibrivell claimed he had been trapped since the earthquake two weeks earlier, but the military provided no details about how he managed to survive.

More than 100 have been unearthed by rescue teams since the Jan. 12 quake, and many more by their neighbors, but most of those were in the immediate aftermath and authorities say it is unlikely for anyone to survive more than 72 hours without water. On Saturday, an international team of rescuers unearthed a shop clerk who they believed had been buried since the earthquake. 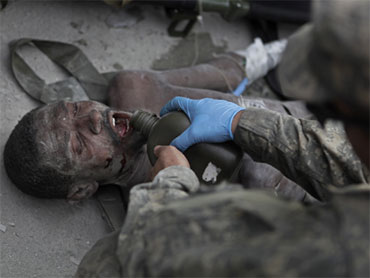 (AP Photo/Ramon Espinosa)
The 7.0-magnitude quake killed an estimated 200,000 people in Haiti and most authorities stopped searching for survivors this week. U.N. relief workers have said the shift in focus is to critical to care for the thousands living in squalid, makeshift camps that lack sanitation.

According to the Associated Press, some 800 to 1,000 aid flights were still awaiting permission to land, a seven-day backlog, U.N. and European officials reported Tuesday. On top of that, "trucks are needed," U.N. spokeswoman Elisabeth Byrs said in Geneva — especially small trucks because "the streets are extremely congested."

The U.N.'s relief coordinator John Holmes estimated that 2 million people need food, but only 500,000 have received some so far.