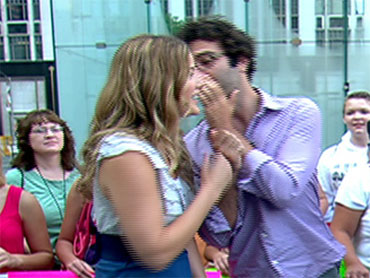 Jake Bronstein may have men stumped for a more creative way to top his proposal to girlfriend Kristina Hoge.

Fifty-nine people at a New York bar stood between Bronstein and his goals: surprise Hoge with a proposal, and break a world record for the longest whisper chain.

Bronstein, who tries to break world records, had tried a month before to propose to Hoge through a whisper chain, but it was unsuccessful.

The failure may have made some nervous to give it another try, but Wednesday on "The Early Show," Bronstein said he wasn't worried it wouldn't work that night.

"The idea was to get as many of our friends involved as possible. It was great. I got to invite a lot of people we knew. When they heard the message, they were excited."

It seems the message overcame the traditionally unreliable medium, as word traveled around the bar. Hoge, who was the last person in the chain, heard the proposal in its correct form first from a man she didn't know.

"I was completely shocked," Hoge said. "Some strange man asked me to marry him. I turned around to ask Jake to beat this guy up and Jake was on his knees."

The couple has not yet set a date for the wedding.