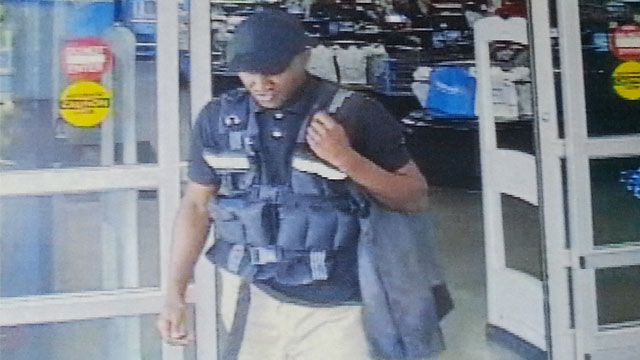 BRISTOW, Oklahoma -- Police say a man dressed as an armored truck driver conned Walmart employees in Bristow, Okla., out of more than $75,000 in cash on July 4.

The armed man, who was wearing an apparently fake bulletproof vest and a uniform that resembled those worn by Loomis employees -- without the company logo -- convinced store employees that he was there for the day's regular cash pick up, reports CBS affiliate KOTV.

Police released surveillance images of the man and the black newer-model Chevrolet Malibu that he left in. Employees said they didn't realize the error until the real Loomis truck came to make the scheduled pick up about 30 minutes later, according to police.

Detective Kevin Webster, who is investigating the case for the Bristow Police Deaprtment, told 48 Hours' Crimesider that the man was likely familiar with either Loomis or Walmart security protocol.

"That appears to be the case, it appears to have been planned with some knowledge, but I wouldn't say for sure at this point," said Webster, who is the lone detective in the town of 4,000. "I've actually been in contact with WalMart and this is the first robbery like this that anybody can remember."

Webster said police have some leads in the case, but declined to elaborate. There are currently no suspects. Additional surveillance images were sent to a lab for enhancement, and may eventually be released to the public, Webster said.

He added that the FBI and the Oklahoma State Bureau of Investigation are assisting in the case, and the FBI may take it over.