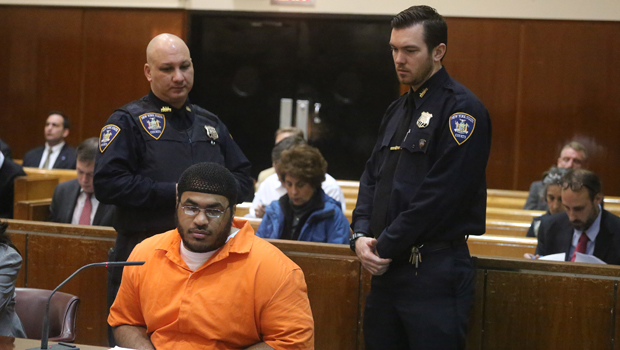 NEW YORK -- A man accused of building homemade bombs to wage holy war in New York City pleaded guilty Wednesday to a terrorism charge less than a week before his scheduled trial in a rare state-level terrorism case.

Jose Pimentel, wearing a knitted skull cap, softly answered a judge's yes-or-no questions as he entered his plea to attempted criminal possession of a weapon as a crime of terrorism. Authorities have called the case a dramatic example of the threat of homegrown, one-person terrorism plots, but his lawyers have portrayed it as an example of overzealous policing in the years since Sept. 11.

With the plea, Pimentel, 29, was promised a sentence of 16 years in prison. He would have faced a minimum of 15 years to life if convicted of the top charge, a high-level weapons possession offense as a terrorism crime. Jury selection had been due to start Monday.

Pimentel, also known as Muhammad Yusuf, is a Dominican immigrant who was raised in the U.S. and converted to Islam around 2004.

He maintained a website with articles praising Osama bin Laden, describing Sept. 11 victims as legitimate targets and listing reasons to "nuke the USA," prosecutors said in court papers. He repeatedly attacked his former wife for disagreeing with his militant beliefs about Islam, and his mother had thrown him out of her apartment over his views, prosecutors said.

In 2011, Pimentel "crossed the line from violent rhetoric on his Internet sites to building pipe bombs to be used against our citizens," Manhattan District Attorney Cyrus R. Vance Jr. said when Pimentel was indicted.

Pimentel was recorded talking about assassinating a judge, killing returning soldiers and bombing a police station or the George Washington Bridge, officials said; he also talked about targeting Jews "and, in general, a civilian population whom he described, often, as collateral damage," Assistant District Attorney Deborah Hickey told a judge Wednesday.

He was arrested that November as he assembled bombs from clocks, Christmas tree lights, match-head scrapings and other items acquired at dollar shops and hardware stores, prosecutors said.

But Pimentel's lawyers have suggested he would never have progressed from Web postings to allegedly making pipe bombs if police hadn't sent a series of agents to engage with him.

One informant and an undercover officer got nowhere with Pimentel, defense lawyers Lori Cohen and Susan Walsh said. Then police sent another informant, a fellow Hispanic Muslim convert who smoked joints with Pimentel while they talked about jihad, accompanied him to buy bomb makings and opened his apartment to Pimentel to put the materials together.

"If you work on someone with professional witnesses, if you acquiesce to marijuana use, you wear people down," Walsh said last month.

The defense had indicated his trial would examine the New York Police Department's intelligence-gathering on Muslims, which came under scrutiny in stories by The Associated Press that showed how the department infiltrated Muslim student groups, put informants in mosques and monitored sermons as part of a broad anti-terrorism effort.

Pimentel took the plea offer to avoid the possibility of life in prison, said his lawyers.

While he admitted his guilt, "the question that will not be answered, at least not in a court of law, is who exactly is recruiting whom in this war, this so-called war on terror," Walsh said outside court Wednesday.

Entrapment defenses, or arguing that police induced crime, face a high legal burden. It's not enough to show that police or their agents created an opportunity for law-breaking; a defendant has to convince jurors that police used methods that risk getting an innocent person to commit a crime.

Most terrorism cases are federal, but Pimentel was charged under a New York state law passed shortly after Sept. 11 and seldom used since.

One case involved a Bronx gang leader whose conviction was overturned when appeals courts said his crimes weren't what the law had in mind.

In another, the Manhattan DA charged two men with plotting to blow up synagogues. Both pleaded guilty. One is serving 10 years in prison, and the other is serving five.

After Pimentel's arrest, two law enforcement officials said the FBI had passed on his case because agents felt he wasn't inclined or able to act without the informant's involvement; the officials were not authorized to speak about the case and spoke on condition of anonymity.