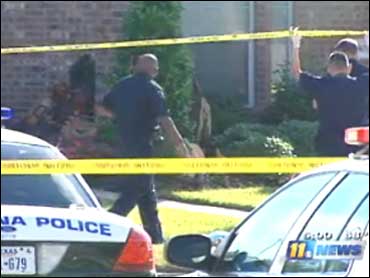 The 911 call came from a Pasadena, Tex., resident, who alerted police to two burglary suspects on a neighbor's property. Before he hung up, two men were dead by his hand.

Joe Horn, 61, told the dispatcher what he intended to do: Walk out his front door with a shotgun.

"Nope, don't do that - ain't no property worth shooting somebody over, OK?" the dispatcher responded.

Shortly after, Horn said he sees one suspect was standing in front of his house, looking at it from the street.

"I don't know if they're armed or not. I know they got a crowbar 'cause that's what they broke the windows with. ... Man, this is scary, I can't believe this is happening in this neighborhood."

He gets more agitated. The dispatcher asks if he can see the suspects but they had retreated into the target's house, out of view: "I can go out the front [to look], but if I go out the front I'm bringing my shotgun with me, I swear to God. I am not gonna let 'em get away with this, I can't take a chance on getting killed over this, OK? I'm gonna shoot, I'm gonna shoot."

"Stay inside the house and don't go out there, OK?" the dispatcher said. "I know you're pissed off, I know what you're feeling, but it's not worth shooting somebody over this, OK?"

"I don't want to," Horn said, "but I mean if I go out there, you know, to see what the hell is going on, what choice am I gonna have?

"No, I don't want you to go out there, I just asked if you could see anything out there."

Almost five minutes into the call, police had not arrived.

"I can't see if [the suspects are] getting away or not," Horn said.

Horn told the dispatcher that he doesn't know the neighbors well, unlike those living on the other side of his home. "I can assure you if it had been their house, I would have already done something, because I know them very well," he said.

Dispatcher: "I want you to listen to me carefully, OK?"

Horn: "I understand that, OK, but I have a right to protect myself too, sir, and you understand that. And the laws have been changed in this country since September the First and you know it and I know it."

Dispatcher: "Mister, do not go outside the house."

Dispatcher: "You gonna get yourself shot if you go outside that house with a gun, I don't care what you think."

Dispatcher: "Stay in the house."

Horn: "There, one of them's getting away!

Dispatcher: "That's alright, property's not something worth killing someone over. OK? Don't go out the house, don't be shooting nobody. I know you're pissed and you're frustrated but don't do it."

Dispatcher: "OK. How big is the bag?" He then talks off, relaying the information.

Dispatcher: "Which way are they going?"

Dispatcher: "I don't want you going outside, Mister..."

"Boom! You're dead!" he shouts. A loud bang is heard, then a shotgun being cocked and fired again, and then again.

Then Horn is back on the phone:

Dispatcher: "Mister Horn, are you out there right now?"

Dispatcher: "Did you shoot somebody?

Dispatcher: "Where are you right now?"

Dispatcher: "Mister Horn, put that gun down before you shoot an officer of mine. I've got several officers out there without uniforms on."

Dispatcher: "Put that gun down! There's officers out there without uniforms on. Do not shoot anybody else, do you understand me? I've got police out there..."

Horn: "I understand, I understand. I am out in the front yard waving my hand right now."

Dispatcher: "You don't have a gun with you, do you?

Dispatcher: "You see a uniformed officer? Now lay down on the ground and don't do nothing else."

Dispatcher: "Lay down on the ground, Mister Horn. Do what the officers tell you to do right now."

Two days later, Horn released a statement through an attorney.

"The events of that day will weigh heavily on me for the rest of my life," it said. "My thoughts go out to the loved ones of the deceased."

The identities of the men killed were released Friday.

They are Miguel Antonio Dejesus, 38, and Diego Ortiz, 30. Official records show that each of them had a prior arrest in Harris County for drug offenses.

The men were reportedly shot at a distance of less than 15 feet.

A woman who lives nearby who asked not to be identified told CBS News affiliate KHOU correspondent Rucks Russell that she always saw Horn as a grandfather figure. "He is the guardian of the neighborhood," she said. "He takes care of all our kids. If we ever need anything, we call him."

But according to Tom Lambright, Horn's attorney and a friend for more than four decades, he's the one in need now. "He just needs everyone to know he's not a villain, he's not a bad guy," Lambright said.

He went on to say that Horn voluntarily gave an extensive video statement to police immediately following the shooting.

Horn was not taken into custody after the shooting. A Harris County grand jury will decide if charges are to be filed.

Lambright says Horn acted in complete and total self defense and has nothing to hide.

Local opinion has been passionate on both sides of the shooting.

One letter to the Houston Chronicle said, "He didn't shoot them in the legs, to make sure they did not run away, or hold them at gunpoint until police arrived. No, he was judge, jury and executioner."

Another letter writer praised Horn, saying, "Where does the line form to pin a medal on Joe Horn? I want to get in line." Another wrote, "Let's get rid of the police force and just hire Joe Horn!"

Support for Horn was also running about 2-1 in an online survey of readers on the KHOU Web site.

The incident may prove a test for a new law recently passed in Texas which expands the right of citizens to use deadly force.

Under Texas law, people may use deadly force to protect their own property or to stop arson, burglary, robbery, theft or criminal mischief at night.

But the legislator who authored the "castle doctrine" bill told the Chronicle it was never intended to apply to a neighbor's property, to prompt a "'Law West of the Pecos' mentality or action," said Republican Sen. Jeff Wentworth. "You're supposed to be able to defend your own home, your own family, in your house, your place of business or your motor vehicle."